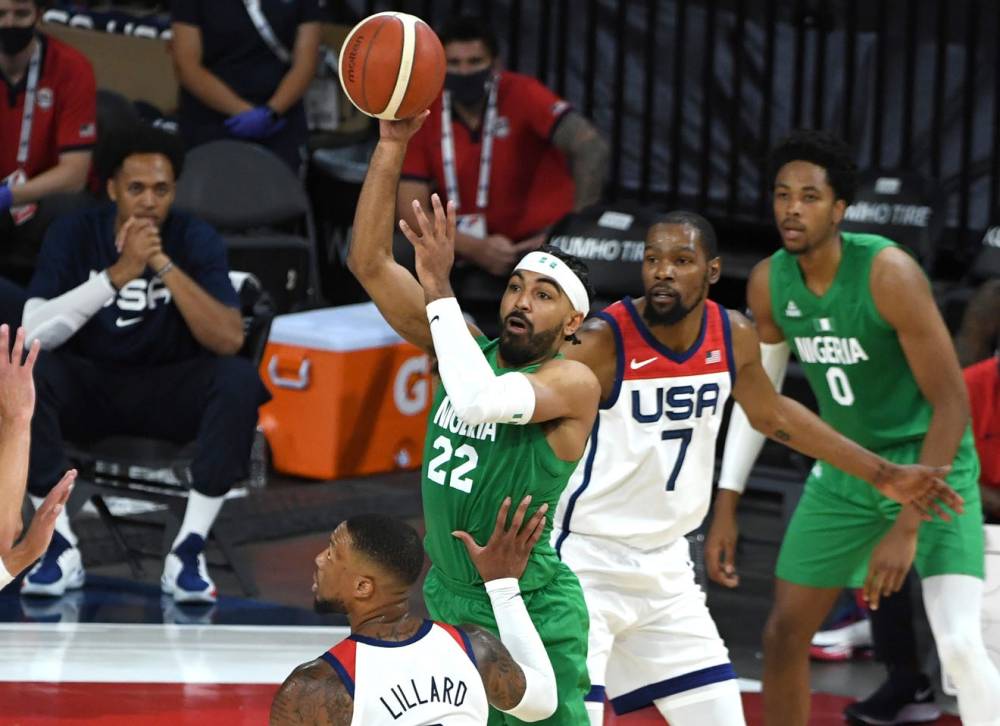 The match-up serves as one of the tune-up games arranged by the Nigeria Basketball Federation for the team as they prepare for the 2020 Olympics where they will face Australia, Germany, and Italy in Group B, according to The PUNCH.

Point guard Gabe Vincent, Caleb Agada, and forward Precious Achiuwa impressed in the encounter. Achiuwa had perhaps the night’s top defensive play with 1:23 left in the first half, reaching with his left hand to block a Kevin Durant dunk attempt.

Nigeria converted 20 three-point throws from 42 attempts in the game with six of the 20 coming from Miami Heat guard Gabe Vincent who led the men in green in scoring with 21 points, four assists, and two rebounds.

Reacting to the win, Vincent hailed the impact of the team’s head coach Mike Brown on the squad.

“Mike’s done a great job with us so far,” Vincent said after the game. “We’ve had a great camp so far. We had to build a new culture, start from the ground up, new plays, new everything. We’ve got a lot of new guys in.

“It’s different when you’re playing for a country. Right now we’re representing the continent. It means the world to us and I hope we showed it here tonight.

“It’s just all the work we put in, It’s no mistake what happened here tonight.

“We knew what it was. We’ve all seen them play at the highest level and make huge shots. We knew what came with that and we just had to make plays.”

The game offered Nigeria’s coach Mike Brown an opportunity to prune his 15-man squad down to 12 players for the Games.

He is expected to announce his final squad on July 17, before the team’s departure to Kizarazu city in Japan two days later for the Pre-Games training camp, before moving into the Olympics Village.

D’Tigers will play Italy, Germany and Australia in Tokyo.

The upcoming Olympic Games will be the Nigerians’ third straight appearance in the history of the eagerly-awaited tournament.

They made their debut at the London 2012 Games before making it to the Rio de Janeiro Olympics in 2016.

The basketball tournament at Tokyo 2020 starts on July 25 with Nigeria taking on Australia in their opening game at the Saitama Super Arena.

They will face Germany three days later at the same venue, before their last game against Italy.

No African country has ever won a medal in the Olympic Games in men’s basketball or advanced past the preliminary stage, but Brown, who is also the Golden State Warriors associate head coach, believes Nigeria has the potential to make history.

“There are more players of Nigerian descent in the NBA than probably any other country besides the US,” Brown, who became Nigeria’s coach in February 2020, said.

“We are looking forward to mixing some of those NBA talents with some very talented individuals that are playing professionally in Europe and abroad.”

UFC 264: McGregor loses to Dustin Poirier in first round after ankle injury