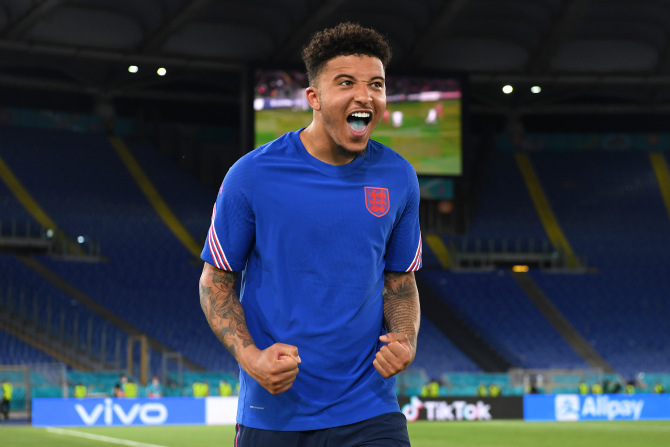 England international, Jadon Sancho, has completed his medicals after his £73million transfer from Borussia Dortmund to Manchester United on Tuesday.

WuzupNigeria reported that United and Dortmund finally reached an agreement in principle for the former Manchester City star’s signing two weeks ago, ending a long pursuit of the youngster.

Subsequently, Fabrizio Romano reported that the England star has now signed his United contract and the Old Trafford outfit is preparing the ‘real’ official announcement with the club’s new kit before he heads off on his holidays.

A black car was seen arriving at the club’s Carrington training complex on the day the former Manchester City starlet completed his move, according to UK Sun.

The 21-year-old will then join close friend Marcus Rashford, Luke Shaw, and Harry Maguire in reporting back for pre-season in early August.

Sancho’s is coming off a disappointing EURO 2020 campaign after he had a penalty saved alongside Bukayo Saka and his soon-to-be teammate, Rashford, as England lost to Italy in a penalty shootout in the final.

All three players were targeted on social media after the game.

However, BBC reports that Sancho who was a team-mate of Phil Foden at Manchester City prior to his exit for Dortmund in 2017, Sancho never played a first-team game for the Blues.

His only competitive club game in England came in a Champions League defeat by Tottenham at Wembley in February 2019.

Sancho was injured for both legs of Dortmund’s quarter-final with Manchester City last season.