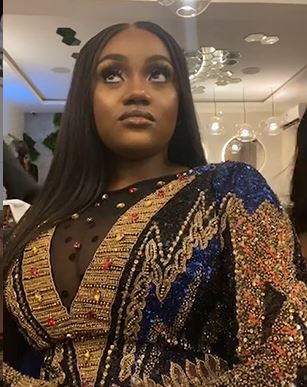 WuzupNigeria joined a host of other well-meaning Nigerians and fans of Chioma Avril Rowland to celebrate her on her 26th birthday which was yesterday.

The mother of one and mother of singer Davido’s only son fueled rumours of their breakup after she failed to stop her live video when a close family member of the singer started talking about her relationship with her son’s father.

In the spirit of celebration, Chioma had chosen to go live on Instagram and aired the goings at her birthday party.

However, a moment that stands out from the live broadcast was when Davido’s cousin stood up to give a remark.

“I don’t know if you are going to be angry, but I am going to say this, no matter what happens between you and my brother, he loves and appreciates you.

“You were friends before anything and remember you have a beautiful son together.”

In reaction, Chioma gave a rather serious look, rolled her eyes and said:

“Clarks you make me sick…”

Growing up was bittersweet, I hawked and did bricklaying – Segbowe of Awon Aladun De