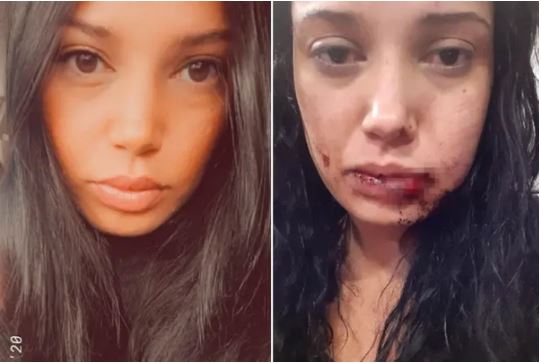 Police are now searching for the man who dragged Brittany Correri out of his car, beat her and pulled a gun after meeting on the dating app Hinge.

Brittany Correri says the brutal attack happened after she went on a date with Ben, last Wednesday.

Correri, who said it was her first experience with online dating, shared gruesome photos on Instagram of her bloodied face in the aftermath of the attack.

She said she was sharing her story publicly to warn of the dangers of online dating.

She said the man, who she met on Hinge, picked her up from her home in a white car and drove to the Hide Lounge in Atlanta.

After the date, Correri said the man refused to let her out of the car and started beating her.

“He started beating me in my head, punching me everywhere – my forehead, my temples, my cheeks, jaw, throat, arms, my back,” Correri told 11Alive.

”He was just telling me that the date cost too much, that I’m not worth that.”

She said things escalated further when he pulled out a gun, pointed it at her and threatened to kill her.

”He was dead-set on killing me,” she said.

The man pulled the car over near the Westside Provisions District before dragging Correri from the vehicle while still hitting her.

A security guard who witnessed Correri being pulled from the car ran over.

Correri said she believes the man got ‘spooked’ and fled in his car.

”He’s dragging me and beating me, and there just happened to be a security guard there. So, she comes running, taking pictures. I think he gets spooked. It was literally by the grace of God,” Correri said.

”It almost just felt like a setup of a situation,” she said.

Police have since said that the man could have driven Correri around for an hour before dragging her from the vehicle.

Authorities have footage of his vehicle after Correri’s doorbell camera captured him arriving at her home earlier that night.

Police say they are still trying to identify and locate Correri’s attacker.