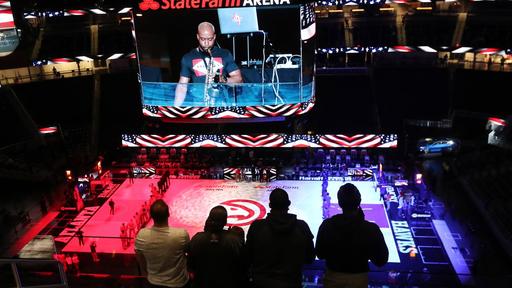 Atlanta Mayor Keisha Bottoms is asking fans not to travel to the city for the NBA All-Star Game of March 7.

The league has not yet announced the game, but it will likely be sometime this week.

But in a statement, Bottoms voiced concern over the event, which will involve players from all over the NBA traveling to Atlanta.

This is in spite of more than 25 NBA games being postponed because of health and safety protocols so far this season.

“Under normal circumstances, we would be extremely grateful for the opportunity to host the NBA All-Star Game, but this is not a typical year,” Bottoms’ statement read.

“I have shared my concerns related to public health and safety with the NBA and Atlanta Hawks. We are in agreement that this is a made-for-TV event only, and people should not travel to Atlanta to party.

“There will be no NBA-sanctioned events open to the public and we strongly encourage promoters, clubs, bars, etc. not to host events in the city related to this game.”

According to a person familiar with the situation, the All-Star Game will not be a ticketed event but there will be an expected attendance of 1,200-1,500.

This will consist of local health-care workers and students/staff from local HBCUs, which will be featured at the event, and some family members of All-Star players.

Typically, there are multiple fans and community-service events associated with the All-Star Game, but those are not happening this year, given the COVID-19 pandemic.

The Hawks reopened State Farm Arena to a limited number of fans (8 percent, or about 1,300 people) for home games beginning Jan. 26.

This was with safety precautions which include mask mandates, contactless entry and, security screenings and rapid-response COVID-19 testing for those sitting within 30 feet of the court.

Those same safety precautions will be in place for the All-Star Game, per a person familiar with the proceedings.

On Friday, Bottoms told reporters that she knew the NBA was taking safety precautions, but there is still concern over people traveling to the city.

“I know that the NBA is taking all precautions necessary to make sure that they are not the source of a super-spreader event, but we know that there will be people who will travel to Atlanta because the All-Star Game will be there,” Bottoms said.

“On a normal year, I’d be really excited at the opportunity to host an All-Star Game, but it is a concern for us,” the mayor added.