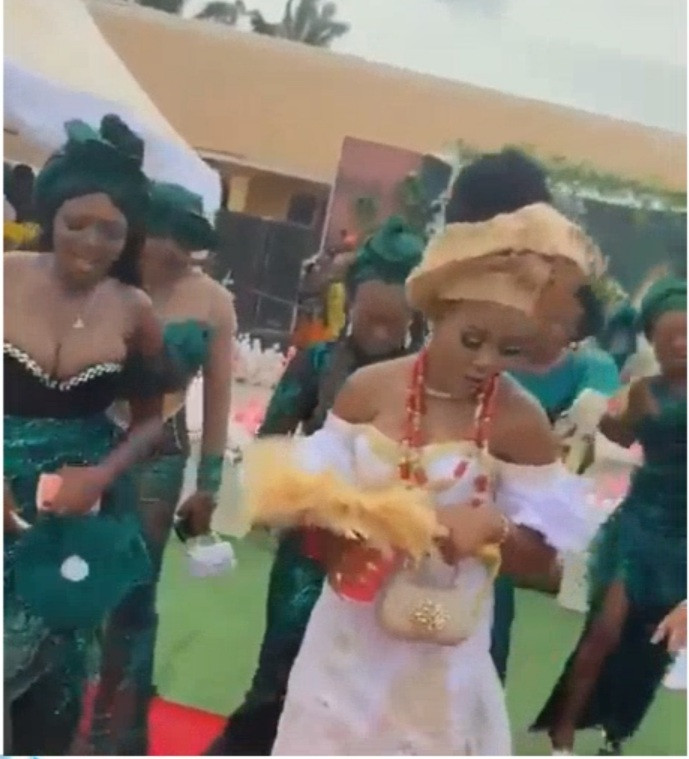 During a wedding the bride is supposedly always the cynosure of all eyes, well that seems not to be the case in this rather interesting tale which WuzupNigeria will be bringing your way today.

Though unclear where this event, which appears to be a wedding engagement, took place, the bride garbed in a white and gold attire failed to arrest the attention of her guest but one of her bridesmaids easily came to the rescue.

The bridesmaid’s breast which was on full display, left little to imagination so much so that a male guest left the bride to spray money on her.

In a video shared online, the bride and her bridesmaids are seen dancing out during a traditional wedding ceremony.

One of the bridesmaids is seen wearing a dress with a really low cut neckline that exposes her ample cleavage.

While leading the bride out, she’s seen dancing enthusiastically, causing her breasts to jiggle and almost spilling out of her dress.

A guest, who appears to be an important person, because of the uniformed escort following him, walks towards the dancing women, but rather than go to the bride, he goes to the busty bridesmaid and begins spraying her money.

Buhari invites me to Abuja, somebody who cannot give money, Mbaka says in viral video