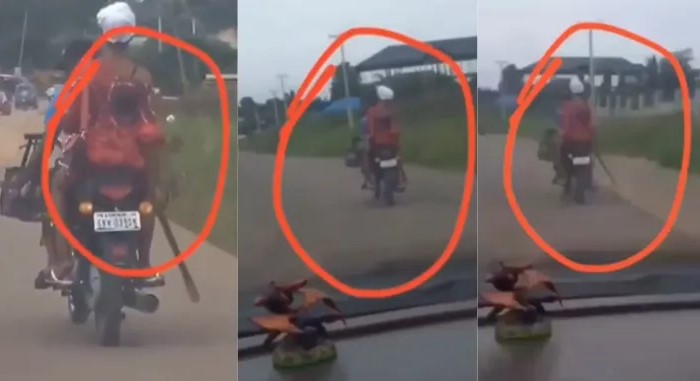 Amid the rising case of insecurity, a viral video captured the moment a nursing mother was seen heading to Church clutching a cutlass.

Although it was difficult to tell which region or part of the country the incident took place,  the video, which recently surfaced on social media has generated mixed reactions from concerned netizens.

In the viral clip, the mother who strapped her child on the back was seen riding a motorcycle while holding the cutlass in her left hand.

Although she didn’t give the reason for holding the cutlass, the man behind the camera could be heard narrating that she was carrying it to church for protection.

Read some reactions below:

Reacting, mud9ine said; It might mean anything.. Maybe they want to clear grass In church or even use it to butcher meat

daramfonamos; “No b Naija we dey? Prevention is better than cure”

teats_de_la_creme; “Yes nahhh. For Thanksgiving after slaughtering the devil last night. I go shakara for satan”