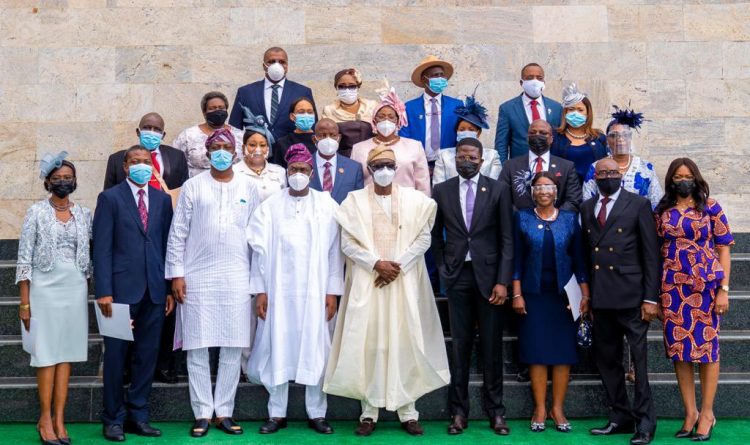 Speaking during the swearing-in ceremony at the Lagos House, Ikeja, Sanwo-Olu urged them to put their ideas to work, toward achieving a Greater Lagos.

He congratulated the 18 new Permanent Secretaries, commending them for the contributions they had made to the progress of Lagos State, especially the delivery of excellent Public Service.

According to him, their role as Permanent Secretaries is crucial to the success of the administration.

”You are the drivers of this administration’s T.H.E.M.E.S agenda in our ministries, departments, and agencies, which is why your appointment is purely merit-based.

”With this government’s commitment to excellent service delivery, we have no choice but to painstakingly appoint only permanent secretaries who share our vision, mission, and drive.

”The role of permanent secretaries in the success of any administration cannot be overemphasised.

“Your various ministries serve as the engine room of our developmental agenda for Lagos State.

”With the screening process, all eligible candidates get an equal opportunity to showcase their knowledge, capacity, competence, and experience,” he said.

The governor said that the right synergy must exist between the executive and permanent secretaries to successfully deliver the administration’s mandate to the people.

He said that he had one-on-one interactions with the 65 shortlisted candidates who were presented for consideration, so as to ensure that only the best were appointed.

”It was really a tough task selecting these 18 men and women from a pool of highly qualified, competent, and experienced directors but their performance at the one-on-one sessions validated the credibility of the process.

”I have no doubt that you will justify your appointment by collaborating with this administration to deliver outstanding service to Lagosians.

”The people of Lagos State deserve the best and I demand the best from you. You must always remember that this is not a ceremonial role; to whom much is given, much is expected.

”As Permanent Secretaries and Accounting Officers of your MDAs, you have the responsibility of optimally managing the human and material resources in your care.

”Let me remind you that our social contract with Lagosians is embodied in the six-point T.H.E.M.E.S agenda, and the faultless implementation of this Agenda should guide your actions,” Sanwo-Olu said.

In his vote of assurance, Dr Akinwunmi Mustafa on behalf of the permanent secretaries thanked Gov. Sanwo-Olu for the confidence he had in them.

Mustafa said that the rigorous screening process showed what Lagos State was known for.

”Mr Governor, you have chosen from the best and we are ready to go and will not let you down.

“You have a group of people that are ready to work with you and make the T.H.E.M.E.S agenda achievable in no distant time,” he said.