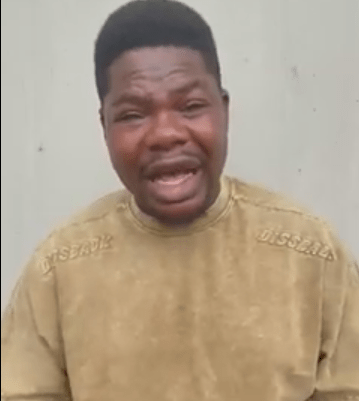 Nigerian comedian, Debo Adebayo fondly called Mr Macaroni has opened up on his ordeal at the hands of the Lagos State security operatives on Saturday.

Mr Macaroni, alongside 39 other #OccupyLekkiTollGate protesters were arrested for staging a protest against the reopening of the Lekki Toll Gate to demand justice for the victims of the October 20 incident that allegedly claimed the lives of 12 protesters, leaving others injured.

In a video posted on his verified Twitter handle on Sunday, the comedian said that the police threatened to kill them and assured them that they would have been dead if they were arrested in the night.

Recall that a video of the comedian and many others went viral yesterday as they wey humiliated by the security operatives who placed them inside a bus without room for ventilation amidst the second wave of the deadly COVID-19 pandemic.

The protesters’ arrest came despite green light for the protests by the government via the Attorney General of the state, Moyosore Onigbanjo SAN.

“We were beaten. We were stripped naked, everyone was beaten… The 39 guys with me, male and female alike. These are the real heroes… these would never have happened if you were not talking about opening the toll gate. We would shoot you nothing will happen.

“It’s a serious war out there, These people don’t care they would jill anybody. If the word was not out that people were already arrested, people would have died clean and clear. They [Police] were saying it, they were telling us that we’ll shoot you nothing will happen. If it were night all of you would have died,” he said.