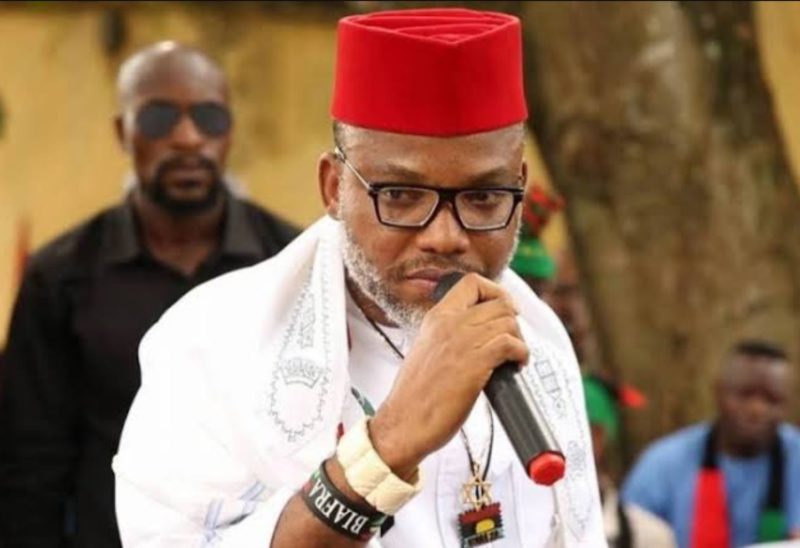 Nnamdi Kanu, the embattled leader of a separatist group popularly called IPOB, has been in the news following his incessant agitations for Biafra restoration in recent times.

Just like the Biblical days of Noah, many could not believe when they first heard the news of his re-arrest by the Nigerian Government on Tuesday, June 29, a development that stirred mixed feelings across the country.

The ‘supreme leader’ as fondly called by his followers has been trending on social media amid his appearance at the Federal High Court, Abuja, for the continuation of his trial.

Recall the self-acclaimed leader of the Indigenous People of Biafra had jumped bail granted him by Justice Binta Nyako in late 2017. However, Kanu told the Federal High Court in Abuja on Tuesday, June 29, that he fled the country to save his life.

The IPOB leader and four others were arraigned before the Federal High Court in Abuja on a six-count criminal charge bordering on treasonable felony in June 2016.

Though they pleaded not guilty to the charge, bail was denied them by the different judges who had earlier tried the matter, including Justice Nyako.

However, Justice Nyako following the deteriorating health of the first defendant admitted him to bail to enable him access quality medical care.

The court had in April 25, 2017 admitted him to bail in the sum of N100 million and three sureties in like sum, one of whom was a serving Senator, Eyinnaya Abaribe.

Kanu’s bail was however revoked in March 2019 and a bench warrant for his arrest issued in November 2019, following his long absence in court for his trial.

The court also separated the trial of Kanu from five others earlier arraigned with him to pave the way for the continuation of their trial.

The present state of Kanu can be best described as a man in the den of lions with so much control and command. One could only imagine how a man gives directive to millions of followers while in UK at the detriment of the government who viewed his authority as a threat to its administration.

Now that the ‘circled dot’ has been captured by the power that be, there is need for caution from both sides (the aggrieved and the oppressor).

This is not time to flex muscles or stir chaos but a battle of ideology that must be tackled idealistically.

A careful look at Kanu’s ideology reveals the aspirations and desires of a tribe who feel cheated and isolated in spite of their input to national development.

The Igbo has been craving for the mantle of leadership (at the Federal level) since the inception of democracy in 1999; rather than being used as ladders to the actualisation of some self-centered politicians with little or no political will to deliver when the need arises.

It’s against this backdrop, the IPOB was formed to agitate self-independence with view to look for alternative route to the actualisation of a better governance since past and present governments have failed to address their heartfelt desires holistically.

What is the essence of being a Nigerian when some Nigerians are still more Nigerian than others? We can’t continue to blame secessionists for the political instability in recent times when we as governments have failed to address the root cause of this problem as we ought to do.

Though I’m not in support of Nigeria’s disintegration but I’m an advocate of a better Nigeria where everyone is treated with respect and fairness as against what is obtained today.

As far as I’m concerned, Kanu isn’t the only threat to the peaceful co-existence of Nigerians as often perceived by this regime but a mighty force to the actualisation of the Biafra nation, which the Buhari’s government is seriously guiding against.

It’s no sin to agitate for self-determination, especially when the aggrieved feel marginalised or not being treated with fairness in terms of governance only if this right is within the ambit of the law. But the question now is, does the present administration obey the rule of law? There is no sense in condemning a criminal for his sins when the accusers are also guilty of the same anomalies technically.

For us to nip this issue in the bud (if rather not too late), we should start seeing every Nigerian as being part of the government and accord them with the respect they truly deserve. You can’t be lion in the jungle of ideas when you keep depriving others of their rights to the dividends of a better democracy.

The Buhari’s regime should listen to the yearnings of the people and not turn deaf ears to the basic necessities while chasing shadow in guise of discharging its duties.

What stops the government to engage separatists in a round-table talk if this we provide a lasting solution to the problem at stake? Can’t we channel the same energy in fighting opposition by coming up with better initiatives to make informed decision geared towards uniting us rather than the unnecessary things that divide us as a nation?

Both the circled dot and the lion should embrace peace and come up with a resolution that will be instrumental to the betterment of our democracy at large.

Related Topics:BiafraIPOBNnamdi Kanu
Up Next

Osinbajo’s integrity and the rest of them BY Oluwafemi Popoola