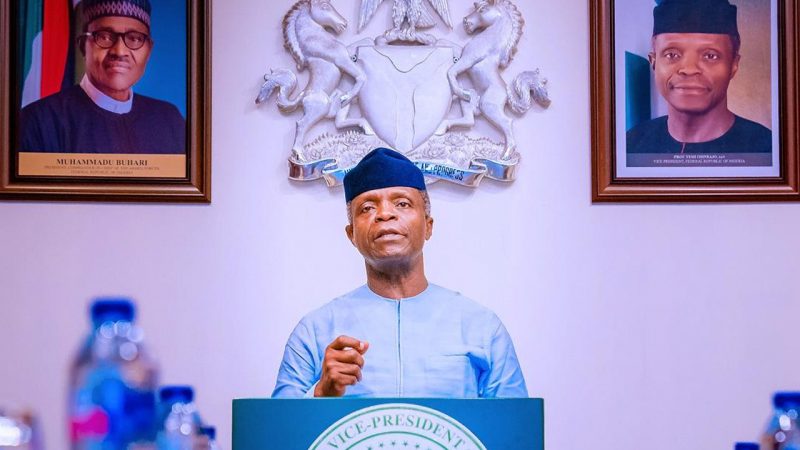 Ever since Vice President Yemi Osinbajo assumed office after the historic 2015 election win, so much has been said on his integrity and personality which was the major selling point for the APC during their 2015 election campaign.

Prof Osinbajo, the former Attorney General of Lagos State, and a Professor of Law embodied the promises of a new moral order going by his long history of integrity as a public officer, this he brightly displayed in Lagos State politics, as his impeccable record when he led the legal reforms in the state is white as snow, not now to talk of his attributes thus far as the Vice President of Nigeria, an office which offers him a constitutional role of the chairman of the National Economic Council (NEC).

As expected, there has been a legion of commentaries and discussions by many observers, writers, political commentators, analysts and revisionists directed at the Redeemed Christian Church of God (RCCG) pastor in a bid to dissect his faith, politics, philosophy and integrity.

In the Nigerian political context and possibly other climes, the moment an individual presents him/herself for a political post, his life automatically becomes a subject of pubic scrutiny. While one would expect that such scrutiny is inevitable as politicians anywhere in the world are expected to be accountable to their people, but the amoral politics of the Nigerian landscape presents a different reality.

Going by Nigeria’s chequered political history, many traditional politicians are generally viewed with distrust because they are sometimes seen as simply occupying public offices for occupying sake, rather than truly serving the people in their exalted position. This general assumption makes political offices in the country a no go area for persons with high moral value and decency.

While the Vice President has enjoyed a great deal of affection and praises by many commentators which is an alien experience for politicians in this country where they are generally held in low esteem, Osinbajo has also endured a furnace of persecution, denudation and name calling like “V.P. Academics” from his traducers, who believe he should not be treated differently. Well, life they say is a mixed bag and Osinbajo’s political career is no different. It has not entirely been a bed of roses for the sprightly 64-year-old, neither has it been a golgotha of thorns.

Osinbajo’s reputation and longstanding integrity was firstly put to the fire in a virulent manner at the backdrop of Tunde Fowler’s exit from the Federal Inland Revenue Service due to corruption cases.

A letter from the late President’s Chief of Staff, Abba Kyari, had surfaced on the Internet querying the FIRS boss on the discrepancy in their figures. The following day, the story came up that the VP allegedly took N90 billion from that same FIRS to fund the 2019 elections. It was the most confusing story of the year in 2019. There were a lot of insinuations and gossips. While some believed it was a knife fight in the APC party politics by some cabals who wanted to reduce Osinbajo growing influence, others posited that the purveyors of such malicious lie had planned it well by dragging Osinbajo to the Fowler’s corruption story due to their similar backgrounds and chummy relationship. Fowler was a childhood friend and a former classmate of the VP.

The apocrypha story trended in beer parlors and on various social media platforms for some days but the purveyors were having difficulty explaining to us how such huge amount of money was delivered.

With another intent to puncture the integrity of the former Law Professor, the Vice President was also dragged into the issue of the N5.8 billion National Emergency Management Agency (NEMA) scandal this time by the opposition PDP.

The main opposition party had claimed that the Vice President had “failed to provide a cogent response to the report of the House of Representatives on the N33 billion NEMA fraud in addition to allegations that the N5.8 billion was withdrawn from the national coffers, while he was Acting President, without legislative consent and expended without recourse to extant due process, procurement and contract rules.”

Osinbajo’s only administrative iniquity was the immediate action he took when he approved funds for the emergency operations in the North East at the time the entire region was facing a severe humanitarian crisis. They claimed that the funds were from the consolidated Revenue Fund not budgeted funds. Although, it was later discovered that the funds approved were actually from budgeted funds, specifically the Rice Levy.

Babafemi Ojudu, the presidential political adviser while responding to the claim said, “Nowhere in the House of Representative Committee on Emergency and Disaster Preparedness report was there an allegation of corruption against the Vice President, Yemi Osinbajo, and this is why claims against him from some quarters regarding the report are mere political contrivances intended to distract him.

“It is evident that the opposition are in search of company for their acts of grand corruption which brought Nigeria to its knees as of May 2015. They cannot find that company in the Vice President.

“First, there is nowhere in the politicised House of Reps report where the VP was accused of corruption or embezzlement of funds. I challenge them to quote any word or sentence that makes such an accusation.”

Again, the Vice President found himself enmeshed in another campaign of calumny. A renowned merchant of fake news, Jackson Ude, on July 8, 2020 through his media platform Pointblank News published a story with a headline that says “How Magu Embezzled N39 billion, Gave Osinbajo N4 billion, Begs for Soft Landing.”

For those who are not familiar with the fake news monger, here is a man who once worked with the former President Goodluck Jonathan government. He has a clear history of blackmail and false publications. The Mrs Oyindamola Amuka fraudulent story and the former Finance Minister, Ngozi Okonjo-Iweala blackmail he orchestrated are still fresh in our memory.

Jackson is a notorious fraudulent publisher, whose illegal activities have denied him a stay in the country. So, such publications against the person of the VP holds no water as none of the reputable news media published similar story.

Not only did the Vice President through his lawyer requested the Inspector General of Police to investigate Jackson and his malicious story, but it also defies human reasoning to imagine how Magu or the EFCC that doesn’t have a vault in its office or has a total control over the Central Bank of Nigeria (CBN), will dole out such fortune to the Vice President (that by law he is not answerable to).

Although the allegation would later disappear into thin air not only the report could not be substantiated but because there are some Nigerians who refused to be gullible. Those that can tell between facts and fictions and won’t mistake a monkey for a gorilla have since trashed the malicious fake news.

The coordination and the barrage at which most of these smear campaigns against the VP always hit the media space has raised a suspicion from some quarters who believe someone or an organised network of people was after VP Osinbajo ahead of the 2023 politics of scheming and permutation.

As Donald A. Adams put it: “To give real service you must add something which cannot be bought or measured with money, and that is sincerity and integrity.” I can confidently say that Osinbajo came to Nigerian politics with reputation and integrity. That is why up till now his loudest traducers have not come up with a valid corruption case against him. He is a man of honour and integrity. Everywhere he goes, he is lauded and garlanded for his virtues. What is bred in the bones they never goes out through the flesh.

A Renowned Professor of Law, Itse Sagay, while commenting on Prof Osinbajo said: “The Vice President is an incorruptible man of God, a man of high moral standing who is as clean as a whistle. He will not appropriate any money that doesn’t belong to him to himself.”

During a gathering of the All Progressives Congress (APC) supporters at a dinner sometime in 2019 after the victory of the re-election of APC government, Osinbajo said: “As I repeated many times during the course of the campaign that our country is not short of ideas, we are not short of projects; we are not short of money either; what we are short of is integrity in office.”

While all this scheming, politics, permutations, constant barrage against the person of the VP may not end anytime soon as clock ticks towards the 2023 general election, Osinbajo will continually remain a person of interest being a major asset of the ruling APC. The fight will get more belligerent if the APC party decides to give him a presidential ticket and Osinbajo should have nothing to fear. His integrity which has brought him this far will definitely not abandon him in the hands of his accusers.

*Popoola, a political analyst, content analyser and news aggregator, writes in from Ibadan*

Related Topics:VP Yemi Osibanjo
Up Next