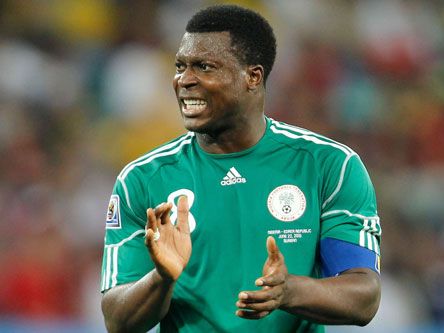 Former Super Eagles striker Yakubu Aiyegbeni has declared he won’t apologise to Nigerians over the open goal he missed during the 2010 FIFA World Cup Group B match between Nigeria and South Korea.

Aiyegbeni missed a glorious chance to put Nigeria ahead at the must-win group game at Durban Stadium on June 22, 2010 in Durban.

Many Nigerians have been angry with the former Portsmouth and Everton striker over the miss.

Speaking on Wednesday during an interview tagged Live with Yak on NationTV, Aiyegbeni said he has no apology for the miss.

“I won’t apologise at all. Why should I? I have scored so many goals for Nigeria too. I have sacrificed a lot for the country. Did anyone apologise to me?

“I cannot apologise because it wasn’t a deliberate miss. I seriously wanted to score. But it wasn’t to be. So many have strikers have missed chances too and nobody will apologise so I won’t.”

Aiyegbeni, 38, is Nigeria’s third-highest goalscorer with scored 21 goals in 57 appearances for the Super Eagles.

Aiyegbeni retired from football in 2017.

The 38-year-old started his career with Julius Berger FC in Lagos as a teenager in the Nigerian Premier League. He was later loaned to Portuguese club Gil Vicente. He made 250 appearances in the English Premier League, playing for Everton FC, Middlesborough FC, Portsmouth FC, and Blackburn.

He made four African Cup of Nations appearances for Nigeria and also played at the 2010 FIFA World Cup in South Africa.

REVEALED: Aubameyang absent from Arsenal due to mother’s health