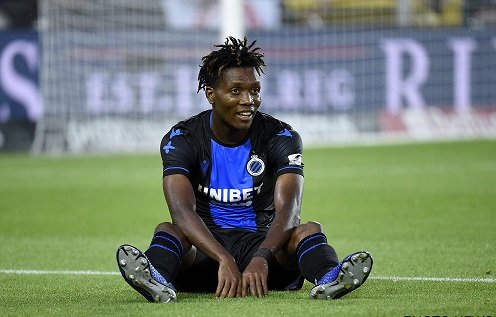 Club Brugge attacker, David Okereke will be rested from his team’s action next week after he tested positive for coronavirus.

The Belgian club confirmed the status of the 23-year-old who will miss his team’s trip to Zulte-Waregem on Sunday.

A strike against Waasland Beveren three days ago saw Okereke end his goal drought for the club.

He was later replaced by Senegal forward, Keeping Diatta, after playing for 77 minutes.

Okereke has made four appearances which includes two starts in the Belgian First Division A this term.

“David Okereke tests positive for Covid-19. The attacker was immediately quarantined and will be retested next week,” the club tweeted.

His compatriot, Emmanuel Dennis, Senegal duo Krepin Diatta and Youssouph Badji are expected to fill in for him while he recovers from the virus.

Okereke scored 9 goals in 22 games in his club’s last campaign which helped them win the Belgian First Division A title.