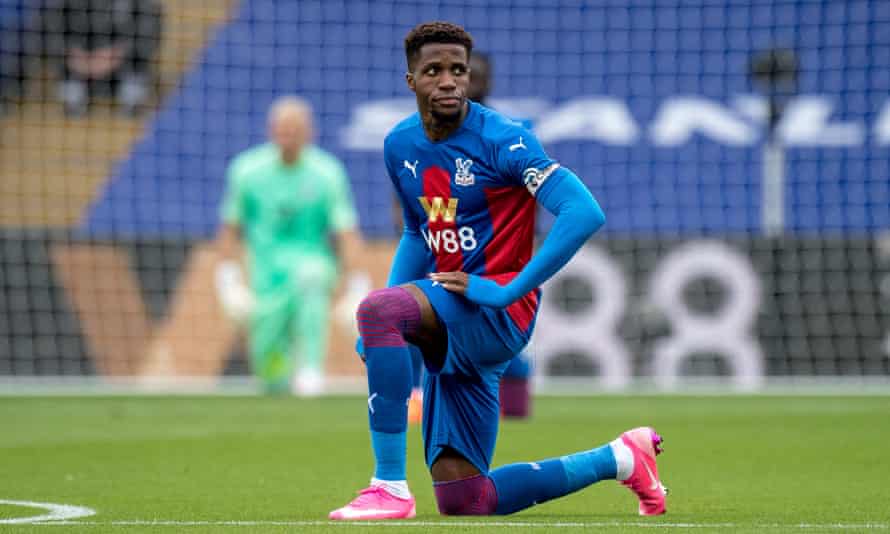 Crystal Palace winger Zaha has stated that he will no longer take the knee to show support for the movement for racial equality.

The gesture has become a before kick-off routine in English football but the Ivorian international stated that it is “degrading”.

Premier League clubs’ shirts also carried the Black Lives Matter slogan during the restarted 2019-20 season before being changed for this season to feature a patch promoting the league’s own anti-discrimination campaign No Room For Racism. -Sky Sports

Speaking at the Financial Times’ Business of Football summit, the former Manchester United feels that the gesture is not yielding positive results and as such charged that is is time for black players “stand tall” in the fight against racism.
“I’ve said before that I feel like taking the knee is degrading and stuff because growing up my parents just let me know that I should be proud to be black no matter what and I feel like we should just stand tall.

“Trying to get the meaning behind it, it’s becoming something that we just do now and that’s not enough for me. I’m not going to take the knee, I’m not going to wear Black Lives Matter on the back of my shirt because it feels like it’s a target.

“We’re isolating ourselves, we’re trying to say that we’re equal but we’re isolating ourselves with these things that aren’t even working anyway, so that’s my stand on it. I feel like we should stand tall and now I don’t really tend to speak on racism and stuff like that because I’m not here just to tick boxes.”

“Unless action is going to happen, don’t speak to me about it,” Zaha added.

The 28-year-old has been the target of online racial abuse a number of times – including from a 12-year-old boy last year.

Arsenal star, Eddie Nketiah is the latest high-profile player to suffer an online racial attack by a troll who has since been banned from Twitter for asking the 21-year-old to leave the club along with a racist message.

“Racist behaviour has no place on our service and when we identify accounts that violate any of the Twitter Rules, we take enforcement action.

Australian Open: Medvedev gears up for final against Djokovic after dumping Tsitsipas