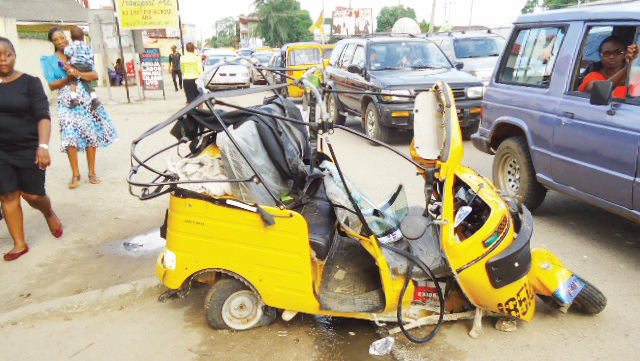 A yet-to-be-identified woman has reportedly died after a commercial tricycle she boarded in Aba, the commercial nerve of Abia State rammed into a stationary truck along the busy Aba-Owerri Road.

Reports have it that the woman who was sitting in front of the commercial tricycle died on the spot even before help could come her way.

Some respondents who claimed to have witnessed the incident attributed the cause of the accident to over speeding and recklessness of the tricycle operator who was trying to meander through the gridlock caused by the truck.

Other occupants of the tricycle including the driver were alive and without any injury sustained.

It was learnt that it took the efforts of a police team from Abayi Police Division to save the driver from the wrath of the mob as the environment became charged.

The Police Public Relations Officer (PPRO) in the state, SP Geoffrey Ogbonna could not be reached for comments, but a senior police source in the Aba Area Command that pleaded for anonymity confirmed the incident.

The Police source who stated that efforts were ongoing to reach the family of the deceased, disclosed that the body of the woman has been deposited in a morgue in Aba.

“The man is police custody as investigation into the matter is ongoing as we speak.

“The keke operator was carrying three persons at the back and one in the front against the orders of the state government.

“The woman was the one sitting in front of the keke. It was the side she was sitting that hit the stationary truck.

“It was a case of over speeding and reckless driving on the part of the keke driver. An investigation into the matter is ongoing. What I can tell you is that the woman died on the spot. The truck, keke and the driver are in police custody, while the body of the woman has been deposited at the mortuary,” said the police source.