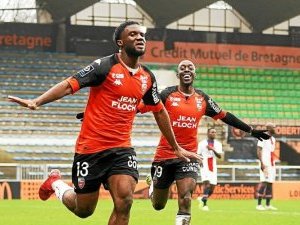 PSG were cruising on the wings of two Neymar penalties( 45′, 58′) after Laurent Abergel gave the home side a 36th-minute lead but had their hopes cramped when Yoane Wissa equalised with ten minutes to go.

Mauricio Pochettino’s men almost went away with a draw at the Stade Yves Allainmat – Le Moustoir Stadium before Moffi’s last-gasp strike (90+1′) sealed the win after Wissa had drawn the hosts level following Neymar’s second penalty of the match.

The 21-year-old forward’s goal was his fifth in his last five matches, including against Nice, Monaco, Bordeaux and Dijon becoming the first Lorient player to score in five consecutive Ligue 1 matches.

PSG missed out on the chance to go top of Ligue 1 as Lille moved top of the summit with a 1-0 home victory against Dijon on Sunday.

See the video below:

Man on fire 🔥 #Nigeria’s Terem Moffi scored in stoppage time as Lorient claim a 3-2 comeback win over giants PSG in the French Ligue 1.

Man City get Aguero boost after full recovery from COVID-19