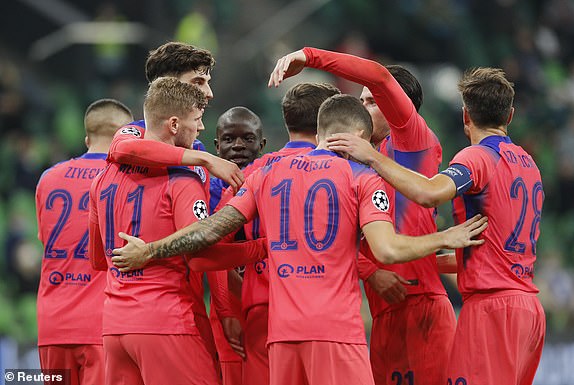 Chelsea recorded their first Champions League win of the 2020/21 season with a 4-0 bashing of Russian side Krasnodar.

Frank Lampard’s men put up a solid display to keep their third consecutive clean sheet and first win in all competition since the 4-0 defeat of Crystal Palace on October 3rd in the Premier League.

The away side missed the chance to go ahead earlier in the game when regular penalty taker, Jorginho, missed from the spot-kick in the 14th minute.

However, the inevitable happened as Callum Hodson-Odoi put the Blues ahead in the 37th minute as the English side ended the first half a goal up.

All hopes of a resurgence from the home side were dashed in the second half as Chelsea added three more goals to make it 4-0 on the night.

The Blues were awarded another penalty in the 76th minute but this time, Timo Werner stepped up to the occasion to bag his first Champions League goal for his new team.

Fellow new signing, Hakim Ziyech also got his first goal for the Blues in the 79th minute while Christian Pulisic made it four in the 90th minute.

Loanee, Moise Kean bagged a brace in the 64th and 79th minutes to give the home side their second straight defeat of the Champions League season.

Recall that the French giants were beaten at home 2-1 in their opening game while RB Leipzig handed the Turkish side a 2-0 defeat last Tuesday.

PSG will now face RB Leipzig in their next group game while Basaksehir face Manchester United.