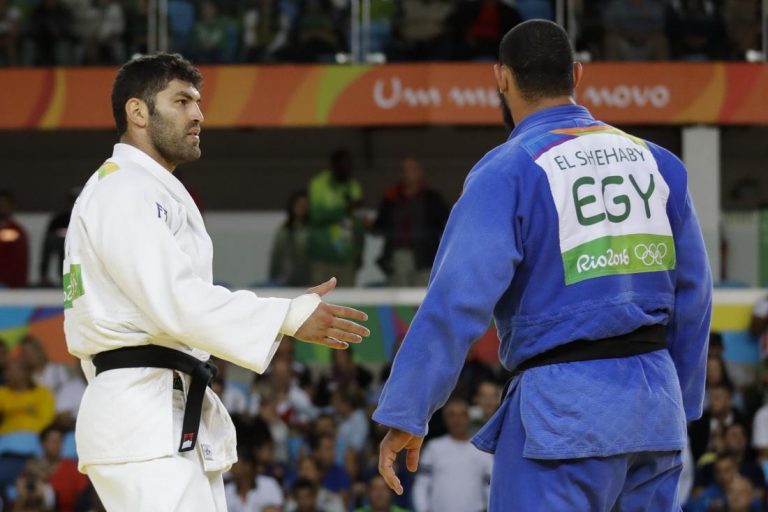 The Egyptian Olympic Committee has sent home Islam El Shehaby, the Egyptian judoka who refused handshake from his Israeli opponent after their bout last week.

WuzupNaija recalls that El Shehaby was loudly booed at the Rio de Janeiro Olympics last week on Friday after he refused to shake hand with Israel’s fifth-ranked Ori Sasson.

Sasson defeated El Shehaby with two throws for an automatic victory, with about a minute and half remaining in the first round bout.

The International Olympic Committee said the Egyptian received a “severe reprimand” for his behavior.

Judo opponents typically bow or shake hands at the beginning and end of a match as a sign of respect.

It was gathered that the 34-year-old, an ultraconservative Salafi Muslim, had come under pressure from Islamist-leaning and nationalist voices in Egypt before the Rio Games to withdraw, but competed anyway.

The IOC, which set up a disciplinary commission to investigate the incident, said the Egyptian’s conduct “was contrary to the rules of fair play and against the spirit of friendship embodied in the Olympic values.”

To prevent a repeat of such behaviour in the future, the IOC asked the Egyptian committee to make sure that all its athletes “receive proper education on the Olympic values before coming to the Olympic Games.”

Sasson, who lost in the semifinals but later won a bronze medal, had said he was not surprised by Shehaby’s actions because his coaches had warned him he might be refused a handshake. “This was his decision,” Sasson said.

“Shaking the hand of your opponent is not an obligation written in the judo rules. It happens between friends, and he’s not my friend,” El Shehaby said after the match.

“I have no problem with Jewish people or any other religion or different beliefs. But for personal reasons, you can’t ask me to shake the hand of anyone from this state [Israel], especially in front of the whole world,” he said.

This is not the first time such incident happened in the Olympics. At the 2004 Athens Olympics, then-Iranian world champion Arash Mirasmaeili refused to fight Israeli judoka Ehud Vaks, earning praise back home.