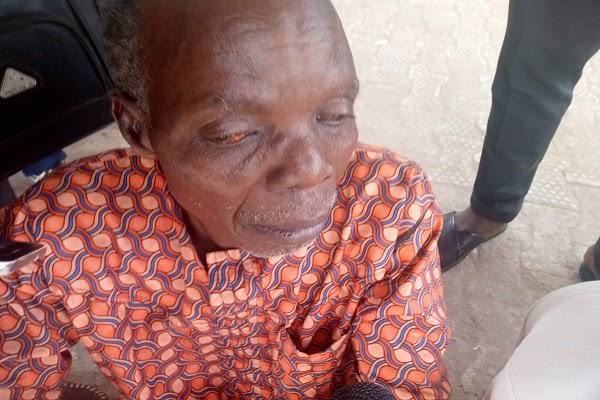 A 68-year-old man simply identified as Linus Onuzulike has been arrested by the Anambra State Police Command for allegedly defiling his sister’s seven-year-old daughter in Abagana in Njikoka Local Government Area of the state.

The suspect was paraded alongside fifteen others for different offences at the Police Command’s headquarters over the weekend.

Speaking to newsmen, Mr Onuzulike, denied the rape allegations, saying he was accused by the victim’s mother, who happened to be his sister after they had a misunderstanding.

“Benedict said I raped her 7-year old girl, but I didn’t. She’s my blood sister, married in Umudioka.” he said.

“She came to my house after putting to bed and pleaded I should accommodate her.

”I gave her a room in my house. She accused me of molesting the daughter because of the misunderstanding I’m having with her.

“I insisted we must go to the police station the following day so she can undergo test but she ran away with the daughter.

“She later came out with the daughter and invited the police to arrest me, claiming to have carried out the test on the daughter.”

The Police spokesperson, Haruna Mohammed, warned those found engaging in any form of crimes to be ready to face the full wrath of the law.

He insisted that the Command would continue to pursue criminals until they refrained from committing crimes or relocate from the State.

Man, 53, in court over an alleged assault in Ogun