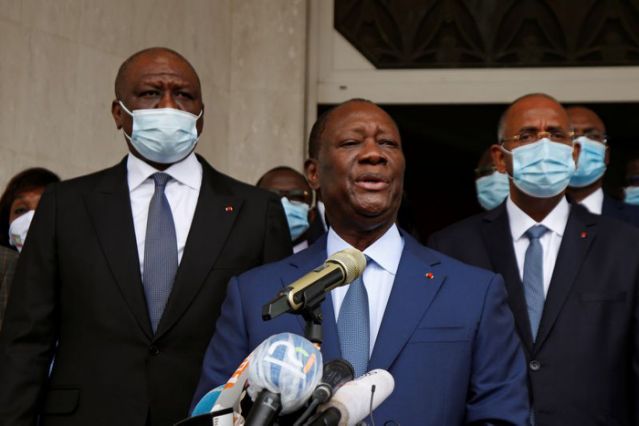 Cote d’Ivoire President Alassane Ouattara on Monday submitted his application to run for a third term after more protests by opponents who say the constitution forbids him to contest the October election.

Over the weekend several shops and a timber truck were torched during ethnic violence between Ouattara supporters and opposition in the southern city of Divo, a cocoa-growing hub, according to images shared on social media.

It is not yet clear what casualties the latest unrest may have caused.

Five people have been killed and more than 100 wounded in clashes between protesters and police since Ouattara, who has been in office since 2011, announced his re-election bid earlier this month.

Tensions were running high even before his decision to run again.

The election is seen as the greatest test yet of the tenuous stability achieved since a brief conflict killed about 3,000 people following his first election win in 2010.

“I have a vision for our country. A vision of stability, a vision of security, a vision of peace for all Ivorians,” Ouattara said outside the Independent Election Commission (CEI) in Abidjan where he filed his application.

His opponents say the two-term limit in the constitution bars him from running again, but he has said his first two mandates do not count under the new constitution adopted in 2016.

The regional bloc, the Economic Community of West African States (ECOWAS), said it was extremely concerned about the latest clashes, calling in a statement for “all Ivorian political actors to avoid violence and turn to dialogue.”

On Sunday, opposition leader Guillaume Soro called on all opposition parties to unite against Ouattara “in the spirit of a collective fight.”

Related Topics:PresidentProtestThird term
Up Next

COVID-19: No date yet for schools’ resumption-Minister