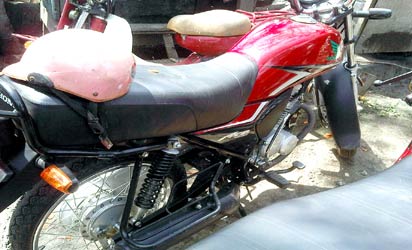 Though details of the incident were sketchy as of the time of filing this report, Happy who resides in Oghara but hails from Ogharefe was said to have confessed to committing the heinous act after thorough interrogation.

Happy, a popular Okada rider in the community, had initially feigned ignorance as to the sudden disappearance of the girlfriend until her decomposing corpse was eventually discovered in the bush where he had hidden it.

A relative of the deceased who lives in Igbimidaka had initially suspected Happy after the lady went missing a few days earlier.

It was gathered that when the bubble burst, Happy reportedly attempted to commit suicide by drinking Sniper. He was apparently pricked by guilty conscience over his evil action and thought of ending his own life just like he did to his lover.

He reportedly took a little dosage of the poisonous insecticide before he was stopped by neighbours who rushed him to the hospital from where he later gained consciousness.

On thorough interrogation thereafter, he was said to have confessed that he killed the girlfriend. He later took the investigating police team to the spot where he had deposited the remains of the girl on Thursday.

The Police Public Relations Officer for Delta State Command, DSP Onome Onovwakpoyeta confirmed the report, when contacted over the incident saying “yes it is true.”