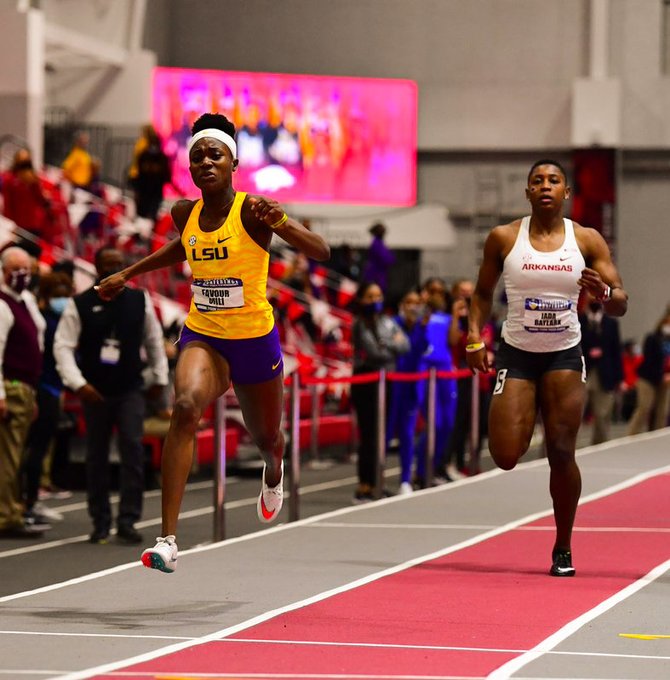 Nigeria’s Favour Ofili booked her ticket to the 2020 Olympics with a record-breaking sprint at the SEC Indoor Championships, Fayetteville, USA Saturday evening.

Ofili became the first Nigerian sprinter to break 23 seconds by besting the 22.80s African record in the women’s 200m set by Ivorian Murielle Ahouré at the NCAA Division I Championships, March 2009 within 22.75s.

The 18-year-old met the 2020 Olympics 22.89secs qualifying standard for the women’s 200m events becoming the fourth-best in the NCAA and the third fastest in her school – LSU – history.

The 2019 African Youth champion placed third overall as the first heat was won by Abby Steiner in 22.50s, while Tamara Clark was second in an SB of 22.70s.

Ofili was also influential as her school secures a 4th placed finish in the Women’s 4x400m relay with a SB of 3:31.82.

The women’s squad clocks a season best of 3:31.82 to take fourth place!

Reacting to her record-breaking performance, the young sprinter expressed gratitude to God for the achievement.

“Competing in my first ever Sec indoor championship, am so very grateful to God for this win,” Ofili said on Instagram.