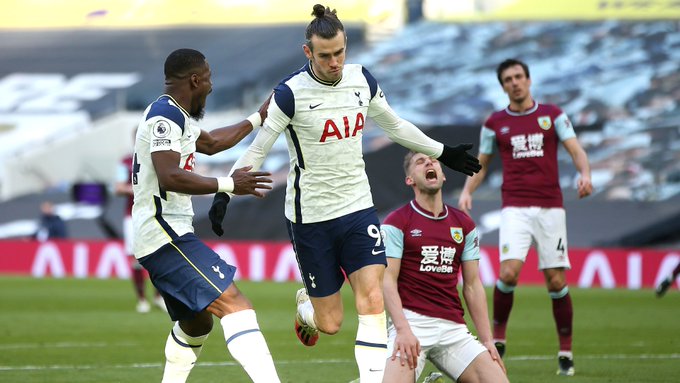 Gareth Bale scored a brace as Tottenham made light work of Burnley with a 4-0 thrashing to end a run of poor games in the Premier League.

Before the encounter on Sunday, Tottenham have lost five of their last six Premier League games (W1), more than they had in their previous 28 in the competition (W14 D10 L4).

Jose Mourinho handed Bale who has struggled to make it into the squad a start and the Welshman repaid the favour with just two minutes into the game.

Son Heung-Min whipped in a low cross towards the front post and the quick-footed Welshman (Bale) found the back of the net with a tap after beating the offside trap. It took confirmation by the VAR to make the goal stand.
Spurs kept pushing the visitors and got a second goal 13-minutes after Bale set up Harry Kane with a pass. The Englishman found the back of the net with a deflected shot.
Mourinho’s men made it 3-0 before the end of the first half through Lucas Moura (31′) who made amends for missing a 1v1 earlier.

Son and Bale combine again in the second half to make it 4-0 against Sean Dyche’s Clarets who stay five points away from the drop zone.

Bale sent a curling left-footed effort perfectly into the bottom left corner from a Son assist to make it 4-0 for Mourinho’s side.

The win is Spurs’ biggest Premier League win at the Tottenham Hotspur Stadium since December 2019, which was also a game against Burnley, a 5-0 victory.
Burnley have lost 12 of their last 15 away top-flight matches against Spurs (W2 D1), shipping 48 goals across these 15 games and conceding at least four goals in seven games.
Related Topics:BurnleyFeaturedgARETH bALETottenham
Up Next

LeBron James fires back at Zlatan Ibrahimovic over criticism