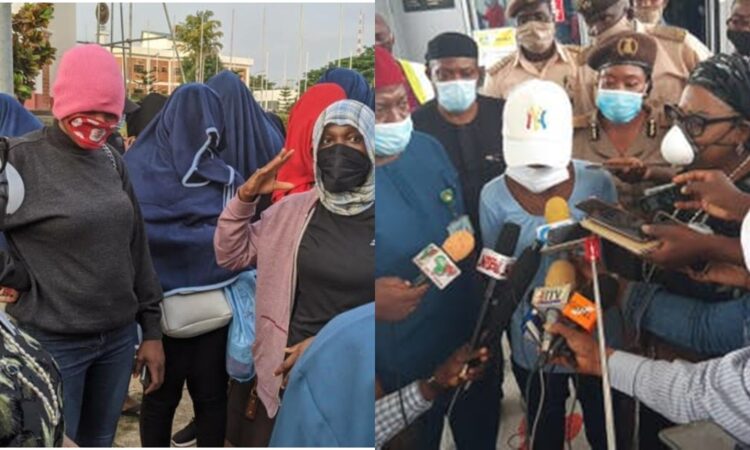 A Nigerian lady identified as Arowolo Olamide Temitope who was barred from boarding an evacuation flight to Nigeria by the Lebanese airport management after receiving orders from her employer in Lebanon has finally arrived in Nigeria.

Arowolo who was evacuated from Lebanon by the Federal Government on Saturday, July 11, narrated her ordeal while she was in the Middle Eastern country, warning young Nigerian girls against travelling abroad.

Arowolo, 31, was among 19 other victims who were received by officials of the National Agency for the Prohibition of Trafficking in Persons (NAPTIP) and the House of Representatives Committee on Diaspora Affairs at the Nnamdi Azikiwe International Airport In Abuja, on Saturday.

A video of Temitope made rounds on the internet regarding the violation of her human rights in Lebanon. In the viral video, Temitope reveals how she was beaten by one Mahmoud Zahran, the husband of her employer, Feyzeh Diab, on April 25, at their home in Choueifat, south of Beirut, after accusing her of stealing a phone.

She went on to narrate instances of emotional, physical and sexual assault she went through from Zahran and Diab. After the video went viral, the Federal Government asked Lebanese authorities to bring her back to Nigeria.

Temitope, speaking to journalists at the Abuja airport, said Lebanon was like ‘hell‘ for her and cautioned Nigerian girls against being lured abroad.

“I’m happy being home. Going to Lebanon is like (going to) a hell. Nobody knows that will happen there. I advise other girls to stay here in Nigeria and try to make it the way the Lord puts them through, because going outside there was like a hell, not only in Lebanon. What I experienced in Lebanon, I pray even not for Satan to experience it.”

“Today, Temitope is back home, unfortunately, I will not allow her show her face, the whole issue has not come to an end we really want to understand what happened in court back in Lebanon.

“We are happy, she is happy to be back home.

“I hope this will be a sign to others young girls out there who want to go abroad for greener pastures to ensure that the circumstances they are going into are the expectations they have when they signed up for these agents,” she said.

Arowolo’s employer had accused her of stealing $5,000 and attempting to kill him. Her prosecution in court had been stalled as the accusers failed to show up, while she was granted bail.

The committee had, however, said it was established that Arowolo suffered abuse and sexual harassment from the husband of her employer, Mahmoud Zahran, during her sojourn in Lebanon.

Related Topics:FeaturedLebanonNational Agency for the Prohibition of Trafficking in Persons (NAPTIP)Nigerian lady
Up Next