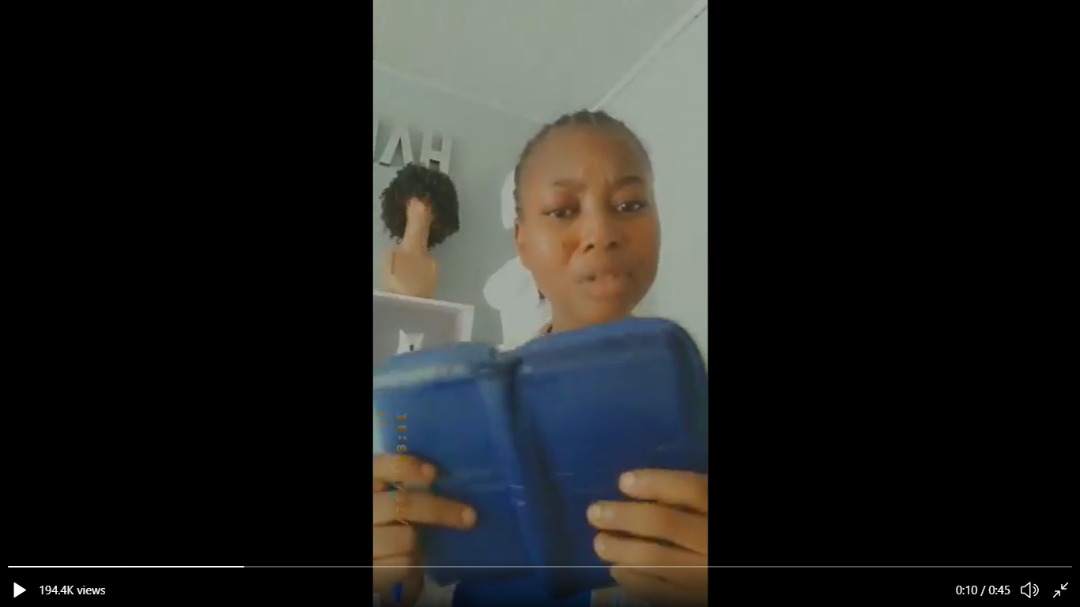 A Twitter user @hannah_ogundare has caused a commotion on popular microblogging site, Twitter, after making a “Sodium and Gomorrah” goof.

In a video that has since gone viral, Ogundare could be seen advising women against reducing their self worth by exposing themselves on social media all in the name of #SilhoutteChallenge.

Her ‘gbagaun’ (goof) line started thus: “…Stop reducing your self-worth, if you should read the Bible, the SODIUM and GOMORRAH, what did they do that made God destroy them?… don’t you know that the world is already coming to an end?”

“Even the men they are not even interested in the nonsense you are showing them,” she added, referring to the #SilhoutteChallenge.

But in an attempt to reference the destruction to Sodom and Gomorrah (two ancient cities destroyed by God with “sulfur and fire” for their grave sins, according to Genesis 18:20, 19:24), Ogundare could be heard clearly pronouncing the former as “Sodium”.

Olamide was not wrong when he said “won ti po chemical po” because this might be one of those #ScienceStudents he was referring to. Nothing but ‘ewè ati egbó’.

While we can’t actually determine if the act was an intentional move for clout or she actually mispronounced the ancient city Sodom as the chemical element called Sodium, watch the video below:

Even Jesus in Luke 10:1–12 did not refer to Sodom as Sodium and Hannah’s ‘gbagaun’ of the century is currently on the 4th top trending topic on the bird app at the time of this report. See people’s reactions below:

Even that sodium and Gomorrah no pain me reach”Men are not interested”…. when did we tell you dat one pic.twitter.com/jTu7gplsUx

Why am I seeing Sodium and Gomorrah on the trend table???
“Sodium” bawo????
Eyin Omo science student ti bere….When they say go to Sunday school, you will not go ? pic.twitter.com/jO6t9qHoG9

Which one is Sodium and Gomorrah again? A new compound element? As in NaG or is it NaGo?

sodium and gomorrah, now we know why lot’s wife turned to salt.

Who else noticed that hannah said ” men are not intrested(in the challenge)” lol Even that sodium and Gomorrah line no pain me reach that one….. Like wtf, who told her men are not interested in #SilhoutteChallenge. my guys are burning data since yesterday…. Lol

What do you know about the #SilhoutteChallenge trending on Twitter?