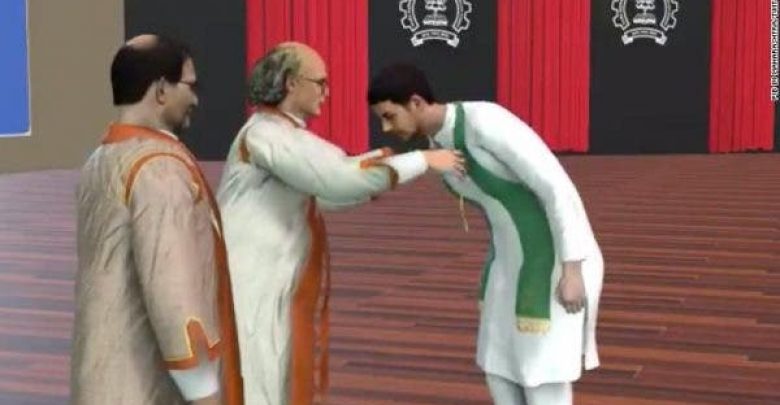 An Indian University has created cartoon characters of its students for their virtual graduation.

The avatars of more than 2,000 students from the Indian Institute of Technology (IIT) Bombay were awarded their certificates by an avatar of IIT director Subhasis Chaudhuri during a ceremony on Sunday.

The unique celebration, designed to abide by coronavirus safety measures, was broadcast on two local TV channels as well as YouTube and Facebook Live, according to a statement from the Indian government’s Press Information Bureau (PIB).

“The Institute thought it best to arrange such a VR-convocation for the graduating students so as not to put their health at risk but at the same time, not deprive them of the sense of achievement and pride of passing out of India’s premier engineering institute,” reads the statement.

IIT is one of the most prestigious technical universities in India, known for producing Silicon Valley titans such as Google CEO Sundar Pichai.

Students were also able “to roam around a virtual campus, visit their hostels and departments virtually, and bump into/meet their friends and faculty,” said PIB.

“Honored to receive a Ph.D. degree at 58th Convocation @iitbombay. The Committee presented everyone with cool personalized avatar,” wrote Deepank Verma alongside a GIF of his avatar receiving a diploma.

Duncan Haldane, a joint winner of the 2016 Nobel Prize in physics and a professor at Princeton University, US, was invited as chief guest at the ceremony, reports CNN.

A university in India has come up with a unique way of awarding students their degrees from a social distance — using virtual reality.pic.twitter.com/Pia56ZbybD