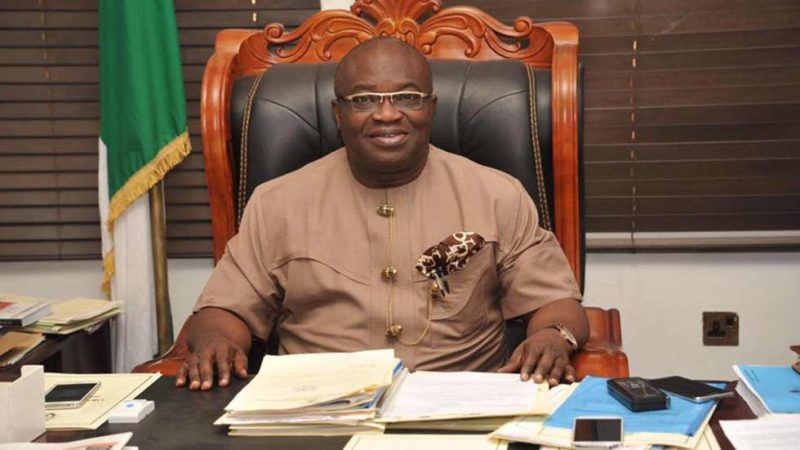 Governor of Abia State, Okezie Ikpeazu, on Friday awarded scholarships to seven students of Cor Mariae Comprehensive Secondary School, Umungasi, in Aba for welcoming him to the area.

Ikpeazu who disclosed this during the inauguration of the reconstructed Immaculate Heart Avenue, Umungasi, Aba said he was impressed by the student’s welcome address they read to him during the event.

He said the scholarship would cover the period the seven students would be studying at the Cor Mariae Comprehensive Secondary School, Umungasi, Aba.

He said that his government was building roads in Abia that would last beyond the tenure of his administration stressing that completing the road reconstruction would enable him to face others.

The Deputy Governor, Ude Oko-Chukwu in his speech, expressed happiness at the inauguration of the road which he said was very critical to residents around it and Aba generally.

“We will continue to work and inaugurate more projects. I thank everyone who came out to welcome the governor because you are happy,” he said.

Chief Bob Ogu, Abia Works Commissioner thanked Ikpeazu for enabling the reconstruction of the road which should link Ogbor Hill through a bridge.

He said the governor’s desire to have the link bridge built was being realized as the bridge’s drawing plan was ready for execution.

The Chairman, Landlords Association of the road, Prince Nweze, on behalf of the association, thanked Ikpeazu for reconstructing the road for the residents of Aba.

He said the reconstruction of the road confirmed Ikpeazu’s desire to make Abia a better place hence it would check the menace of hoodlums in the area.

Chief John Okiyi Kalu, Abia Information Commissioner said the roads were ongoing projects of the government of Ikpeazu who was determined to make a difference with road infrastructure in Abia.

He said parts of the infrastructure development of Ikpeazu included the remodelling of Ngwa Road market and other major roads like Omuma, Ohanku, Obohia and Ngwa Road in Aba.

“Governor Ikpeazu has a passion to deliver roads that will last for fifty years.

“In the next 12 months, he will be delivering 250 kilometre roads targeted at rural communities in Abia. Ikpeazu is indeed working,” Kalu said.

Related Topics:AbaGovernor Ikpeazu Okezie
Up Next