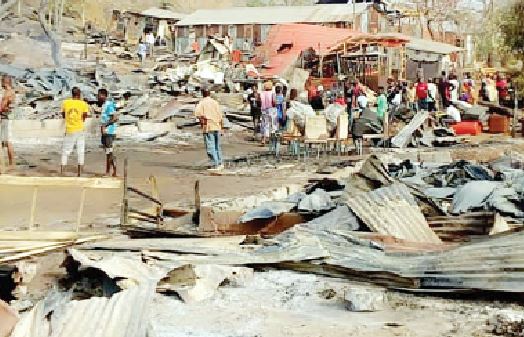 In separate interviews on Monday, they said that the presence of such a fire station would boost response to fire emergencies to save lives and property.
Journalists reports that there was a fire outbreak at the early hours of Sunday in Kugbo Furniture Market, Abuja.
The fire outbreak affected a significant part of the market, including more than 200 furniture galleries.
In an interview, Mr. Bright Emeka, a shop owner in the market, said that the market would need a fire station to prevent any future fire outbreak.
He suggested that tanks filled with water ought to be provided to aid easier fire fighting.
Mr. Nnedu Ndubisi, another trader, urged the federal government to provide one or two fire-fighting vehicles at the market with the provision of boreholes for water supply.
Another trader, Mr. Uchenna Eze, said that even with the assistance of almost all the security agencies at the scene, all efforts to rescue property proved abortive.
According to him, an estimate of the property lost to the inferno is more than a billion naira.
Mr. Uchenna Rufus, also a victim of the fire outbreak, said that the incident was unfortunate as he watched the fire in his shop helplessly.
“We sighted the fire which was about four lines before my own shop, we were trying to quel the fire but unfortunately the fire got to my shop.
“The fire might have been caused mistakenly or out of carelessness but we do not know.
“To avert fire incidents, we at the timber area prevented people from smoking or cooking around here,” he said.
Mrs. Amaka Nmayoka, another victim, said that she was on her way back to Abuja from a tour when she received a call informing her of the incident.
“My old and new stock all got burnt and so I can’t even give an account as to all I have lost,” she said.
She called on the government to support all the traders affected by the inferno either by the construction of new shops or little money.
Amaka blamed the market security guards for allegedly not putting a call across to the fire service as early as possible.
Abuja Municipal Area Council (AMAC) Chairman, Mr. Abdullahi Candido during an inspection and sympathy visit to the market traders, called for synergy between Abuja authority and Kugbo Furniture Market stakeholders.
“At a point when we came into office in 2016, we took a step to see what we can do for the market in partnership with stakeholders here to bring about sanity to the operations in the market.
“But we had issues between both parties and we all know when that happens, you can’t get any result which should be avoided as this is an unfortunate situation.
“Our mother ministries must now engage with the local councils so that together they can find a lasting solution to prevent this type of outbreak in the future,” he said.
Mr. Gregory Eze, Superintendent of Fire in charge of Karu and Garki command, said that although the firefighters got to the fire scene on time, efforts to put out the fire proved abortive.
“Immediately we received the call we were at the scene before 7 a.m and we were there until about 7:25 p.m.
“We got another call after leaving that the fire had been ignited at a section of the market; so we returned to the market and fought the fire until about 2 a.m. on Monday,” he said.
He noted that the firefighters were able to stop the fire from spreading to other parts of the market and that no life was lost.
Eze said that the service in 2020 had embarked on a fire safety enlightenment programs but had observed that most traders were reluctant to pay attention during the training.
He said that more fire safety programs would be taken to markets and communities in the territory to prevent fire outbreak recurrence.
MORE READING!  VIDEO: Yahoo boys bath in the middle of the road as native doctor performs ritual on them
Related Topics:FCT
Up Next