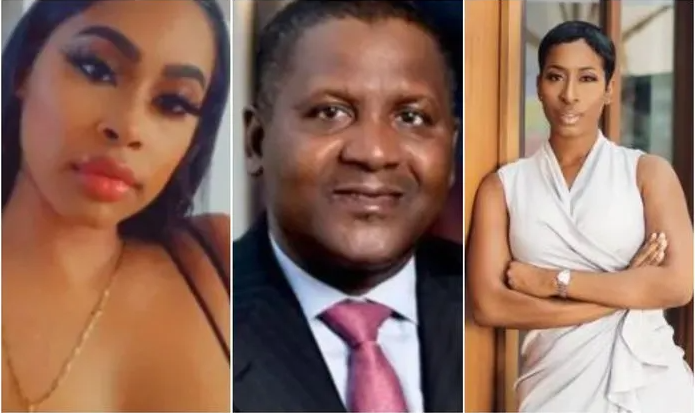 Alleged American girlfriend of Aliko Dangote who shared a photo of his buttocks on Instagram, Allarounda1, has revealed she did it to clear his name.

Allarounda1 called out the billionaire’s alleged side chick for lamenting that he broke her heart when he dumped her.

Allarounda1’s call out of Dangote’s alleged ex, Bea Lewis, was done on Instagram as the latter claims to have shared his nude in an attempt to clear his name.

Read their somewhat subtle exchange below:

“I’m here to clear his name. What she did was disgusting and uncalled for. To give a paragraph with such descriptive detail is so classless of you. Act like you’re used to things and most importantly value yourself more babe. Never let money do clown shit @iambealewis like that.”

“You wanted to go viral sooo bad! He needed to hit you with an NDA!! @iambealewis, Wow you been delusional this whole time. Seek help”

“Now ladies… It’s one thing to want to join in and tell your story if any. But posting intimate of inappropriate photos is disrespectful in any relationship. Especially if you took it without them knowing. Let’s keep it classy my loves,” she wrote.

Nigerian Catholicism too much about money, fundraising, thanksgiving – Chimamanda Adichie