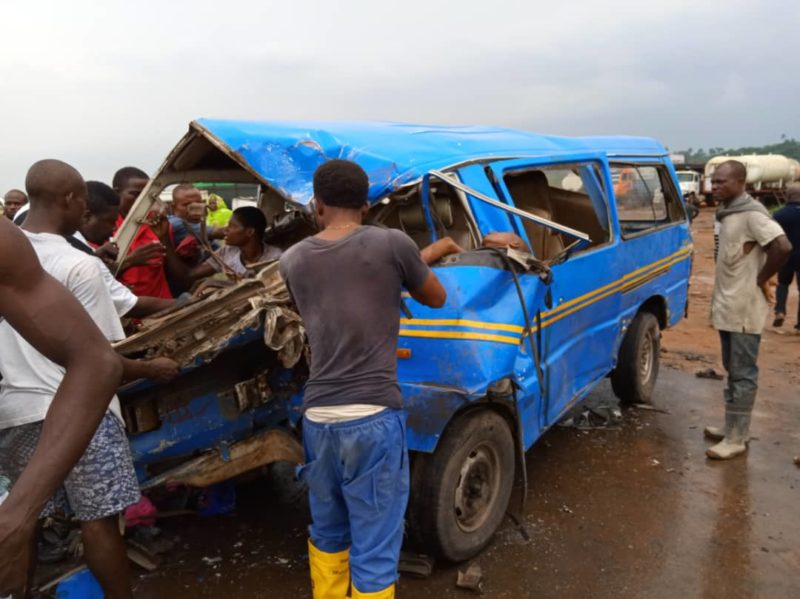 One of the buses involved was said to have left Lagos and was heading for Kano, while the second bus was said to be heading to Ibadan from Akure when they collided.

Eleven people died at the accident scene while one other person died at the hospital the Public Education Officer of the Federal Road Safety Corps in Osun State, Agnes Ogungbemi, said in an updated statement.

Ogungbemi said, “The accident occurred along Gbongan/Ibadan route, opposite Ayedaade Local Government secretariat around 9:05pm on Friday and our men responded immediately.

“The accident was caused by speeding, as two commercial buses, a White Mazda E2000 Bus and a Black Toyota Hiace Bus had a head-on collision. 22 people, 19 male, 2 female, and one female child were injured. 11 people, all male died out of 33 people involved in the crash.

“We took 16 injured victims to Ariremako Hospital, Gbongan, 6 injured victims were taken by Central Hospital, Osogbo. FRSC Team took 10 corpses to Obafemi Awolowo University Teaching Hospital, Ile Ife morgue. The remaining corpse was taken by his relatives who are from the Hausa community in Lagos.”

MORE READING!  Human growth hormone, the substance that sent Okagbare out of Tokyo 2020
Related Topics:
Up Next