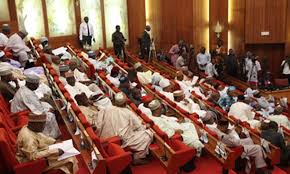 ‎
The House of Representatives has expressed worry over the slow pace of work on the Abuja-Kaduna-Zaria-Kano roads projects awarded by the Federal Government in 2018.
The Chairman, House Committee on Works, Hon. Kabir Abubakar Bichi , ‎made the disclosure during a courtesy visit to Gov. Abdullahi Ganduje on Friday in Kano.
The chairman said they were in Kano as part of their oversight function to inspect and assess federal projects being executed in the state.

Bichi said the committee was dissatisfied over the delay in the execution of the project by the Contractor, Julius Berger PLC.

The lawmaker said the committee might be forced to ask the government to re-award the 400 km contract to several other contractors to ensure that the project was completed within the stipulated time.‎

“We are disappointed that after about 26 months since the commencement of work on the project, only less than 20 percent of the work has been completed.‎

“In phase one of the project, from Zuba to Kaduna, unfortunately,  only 10 km ‎has been executed out of the 165 km while from Kaduna to Zaria only five to six km completed out of the 75 km, then from Zaria to Kano ‎the only 11km executed,” he explained.

He said that “the House will not accept any extension of the completion date or a variation of the project.

According to him “as a result of the delay in completing the project, several lives have been lost on the road, and we cannot continue to lose lives on this road.”

‎Bichi said with the slow pace of work, it would be impossible for President Muhammadu Buhari to commission the projects during his tenure.‎

The chairman of the committee also lamented the slow pace of work in Kano-Maiduguri road and Kano western by-pass project awarded over 10 years ago.‎

‎Earlier, Ganduje stressed the importance of the oversight function of the committee, saying that without their supervisory role their will be a conflict between the ministry of works and contractors.
He also said that the supervisory function of lawmakers would check ‎the prevalence of neglected and abandoned contracts across the country.
The governor commended Buhari for committing huge sum of money on infrastructural  ‎development in the country.
MORE READING!  Adamawa Govt. to reopen schools Oct. 12 — Gov. Fintiri
Related Topics:KanoNASS
Up Next