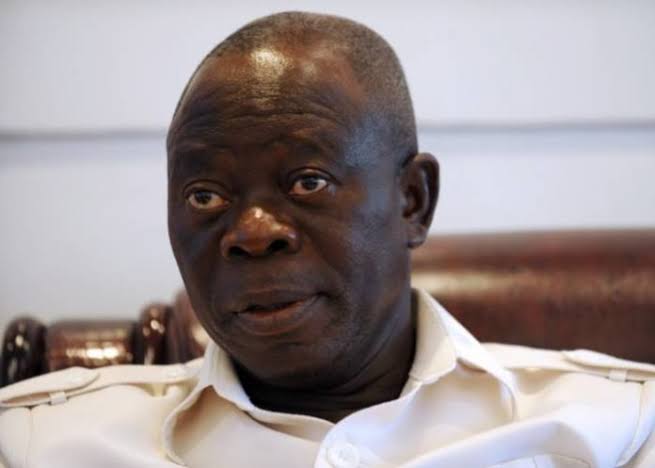 The National Chairman of the All Progressives Congress, Adams Oshiomhole, has accused the Peoples Democratic Party (PDP) of deliberately attempting to blackmail the Supreme Court to get favour in governorship cases in Sokoto, Bauchi and other states.

Oshiomhole said calling for the resignation of the Chief Justice of Nigeria, Tanko Mohammed, was the height of recklessness by the PDP and an effort to cause civil unrest in the country.

The former Edo State governor, stated this at a press briefing in Abuja on Friday while replying the PDP National Chairman, Prince Uche Secondus.

The Supreme Court had in a judgment on Tuesday sacked Emeka Ihedioha of PDP as the governor of Imo state and declared the APC candidate, Senator Hope Uzodinma, as the duly elected elected governor.

Secondus while reacting to the judgement on Thursday said the Supreme Court under the CJN had become compromised.

He alleged that the apex court had become a willing tool to execute the ignoble agenda of the APC-led Federal Government against the Nigerian people.

But Oshiomhole said the statement was not only designed to intimidate the judiciary but to lay foundation for civil unrest.

He said, “The PDP is not only reckless they believe it is their birth right to benefit from electoral fraud. Courts are bond to interpret laws according to the constitution. No court has power to bend the 1999 constitution of Nigeria as amended.”

Oshiomhole said the results used to declare Ihedioha as governor showed he did not get the required one-quarter vote in two-thirds of the 27 local government areas of Imo state.

He lampooned the state Returning Officer, Prof Francis Otunta, for not recognising the fact that 12 is not 2/3 of 27.

He said, “That a returning Officer ought not only to be dismissed but should face the consequences of his action. It was the height of irresponsibility on the part of Independent National Electoral Commission to condone such action.

“A professor of mathematics curiously did not know that 12 is not two third of 27 local government areas and proceeded to unlawfully declare Emeka Ihedioha as governor of Imo state.

“In a society that is committed to fairness and rule of law, that returning officer ought not only to be dismissed, he ought to have reported himself to the security at how he must have arrived at the decision to declare Emeka Ihedioha as governor.

Oshiomhole said the INEC collation officers working with the PDP deliberately cancelled the results in the stronghold of Uzodinma to make him lose the election without valid reasons.

He said Uzodinma would have scored the highest votes if the results had been collated the first time.

“It has been the philosophy of PDP from 2003 after the 1999 elections to arrogantly ask their agents or activists to manipulate INEC to add vote and tell the loser who would have been the winner to go to court and challenge them if he is not ready to accept the fraud perpetrated between INEC and PDP.

“That exactly was what they did in the case of Imo and I think that was the height of irresponsibility on the part of INEC.  Now that it has been established that the Professor went out of bounds and indulged in this reckless pronouncement that has led us to this situation that we are in, he can not enjoy the comfort of his zone while he has laid foundation that all kinds of political vultures are trying to feast on.

Oshiomhole said the APC-led Federal Government would bequeath a stable democratic culture to the country by promoting the rules of the game and adhering to the provisions of the constitution.

“I don’t know how long we are going to be in power, but it is safe to say that we will not be in power for ever. As we deepen democracy, clean the books, Nigerians will imbibe the culture of free and fair election…. only God can predict who will always win election.

“Therefore, my long term interest as a Nigerian is better served by adhering to hard facts and ensuring that at our own levels, we all play our part to ensure that elections are free and fair. As a person, having being a victim of election rigging, nothing in my life will make me go out of my way to aid and abate electoral manipulation.”

The former Edo governor cautioned Secondus and the PDP for calling for the resignation of the CJN.

He said, “When they make statement such as ‘this is a coup, this is a threat to our democracy,’ they behave as if they have another passport. But the rest of us who have only one passport, the green passport, this democracy has come to stay. We must contribute our own quota to deepen it by obeying the rules of the game.”

Oshiomhole accused the PDP of promoting the culture of do or die politics.

“It is a fact that PDP is a beneficiary of  fraud year in year out and it became part of their sing song over time to rig them out and let them go to court.

“The PDP can never, whether on ground of morality or on account of their known history pronounce, in a manner in which they did as if they are not the ones who laid foundation for all the challenges we are facing in our democracy.

“The current electoral act was not crafted by the APC government. It was crafted by the PDP government because they had the instrument of rigging and they made it such a law that it is almost impossible for anyone who has been rigged out to seek redress from the law court. This is why our President has committed himself to doing everything he can to ensure that, on the basis of the lessons learnt, he will clean up the system and leave us with a legacy that will ensure better elections in the future.”

The former Edo governor recalled that the APC accepted its fate when it was barred from presenting candidates in Rivers state in the general election and when its victories were awarded to the PDP in Zamfara after winning the governorship as well as the National and House of Assemblies elections.

He added, “The PDP has Zamfara for nothing, with no efforts at all. Again, because we have to be law abiding and not withstanding our reservations, we did not go to any television to castigate the Chief Justice of Nigeria or the Supreme Court for the judgement.

‘In life, you don’t always win. You win some and lose some. A matured democrat is the one that is capable of celebrating when the rules are in his favour, but must also have the courage of living with the pains of defeat. That was why with all the pain in our heart, we accepted Rivers and Zamfara.

“At other levels, we lost two Senators to PDP in Sokoto. We believe that we won those elections, but the Court of Appear ruled against us and awarded them to the PDP, but we did not castigate the panel because we had to restrain ourselves as part of our won contribution in sustaining democracy and the rule of law.

“If we can only celebrate when we win; denounce, abuse and castigate when we lose, there will be no judiciary in Nigeria

“PDP leaders are being short sighted when they frontally attack the judiciary when they lose election and when they win, no matter how unfairly in the eyes of the ordinary people, it is democracy at work and the rule of law has prevailed.

“The Supreme Court has the responsibility to make final pronouncement if the parties involve decide to go to court. So we repose confidence in the Supreme Court and all judges as well as those of the Court of Appeal. This is what we are obliged to do in a democracy based on the principles of separation of power.”