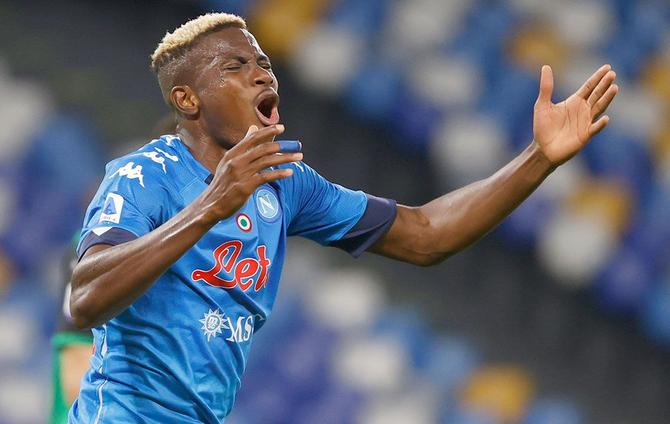 Matteo Pessina scored twice as Atalanta knocked holders Napoli out of the Coppa Italia with a 3-1 victory on Wednesday to set up a final against Juventus.

A goalless draw in the first leg of the semi-final left the tie on a knife edge, but the hosts raced into a commanding early lead as Duvan Zapata smashed in an unstoppable shot and Pessina swept home the second inside the opening 16 minutes.

Napoli came to life after the break and pulled one back through Hirving Lozano before Pessina’s dinked finish 12 minutes from time left the visitors’ hopes of a successful Cup defence in tatters.

“It’s a great satisfaction, we dedicate this to the fans. The regret is not to live these moments with them, but reaching a final is a sign of continuity,” Atalanta coach Gian Piero Gasperini told a news conference.

“Since Jan.3 we’ve played every three days, for six weeks. These guys are extraordinary, it’s not easy to recover all your energy. This is an extraordinary team for its courage and spirit but also for its respect for the opponent.”

Atalanta have won the Coppa Italia once in their history, in 1962-63, and finished as runners-up on three occasions, most recently in 2018-19.

They will face Italian champions Juventus, who have won the cup a record 13 times, in the final.

Gasperini made four changes from Saturday’s draw with Torino, with his side three points off Roma in the final Champions League spot.

Osimhen, who joined the club from Lille in September, started his first game since November after recovering from a shoulder injury and coronavirus.

“As we are, another team could have conceded four-five goals, we had the strength to react,” the former AC Milan midfielder said.

“For Osimhen it was not easy to return after 94 days out, at times he did good things but he lacks his main talent which is his speed. I am not sorry but he can do more.”

Napoli coach Gennaro Gattuso faced increasing pressure ahead of the game after a Serie A defeat by mid-table Genoa left his side with two wins in their last seven games in all competitions.

After another loss and with a league game against in-form Juventus up next on Saturday, Gattuso was asked if the next match could be his last chance.

“I’m the captain of the ship, and when things go badly it’s at the expense of the captain. I can’t think about if this is the penultimate or last chance, I need to work and I must manage to give confidence.

“I’m a coach, it can happen. I won’t be the first or the last, but I have a duty to keep trying until the end.”

The performance of Gattuso’s side in the first half did little to silence the critics as Zapata was left with time and space to gather a pass, turn and rifle in a superb finish from the edge of the box.

Zapata was involved again when his pass sent Pessina through on goal to finish, and Gattuso rang the changes at halftime by bringing on winger Matteo Politano and switching to a 4-2-3-1 formation.

The move made an impact as a deflected Tiemoue Bakayoko shot fell to Lozano at the back post and although his initial effort was saved, the Mexican sprang to his feet to knock in the rebound.

Atalanta responded as David Ospina was forced into good saves from a Josip Ilicic shot and dipping Pessina volley, but the Colombian was beaten again when Zapata teed up Pessina to race through on goal and lift a finish over the keeper.

We made mistakes and were punished, Mourinho on Tottenham’s FA Cup exit