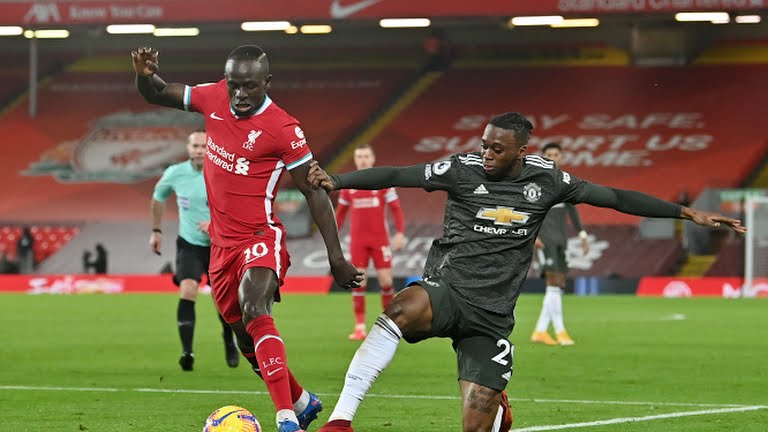 League leaders Manchester United held Liverpool to a goalless draw at Anfield to remain on top of the Premier League summit on Sunday.

United began the game a bit sloppy with one or two misplaced passes but the home side did little to make the visitors uncomfortable in the north-west derby.

Despite having the vast majority of the ball in first 30 minutes, Liverpool who are looking to end their three-game winless streak in the league, failed to get a shot on target after seven attempts, as did the visitor.

The game dragged on to the half-hour mark, begging for a spark, as it looks as though Liverpool are playing to the pace of Ole Gunnar Solskjaer’s men who preferred a less fast approach to the game.

United were awarded a freekick when Xherdan Shaqiri tripped Luke Shaw giving Bruno Fernandes the opportunity to register his presence on the pitch as his freekick a bit wide off the Liverpool goal.

Marcus Rashford’s offside calls was sadly the highlight of the first half after he was called offside four times in the opening 45 minutes, his most offsides in a Premier League match, and the joint-most of any player in a full game this season (Son, four vs Southampton), according to Optajoe.

The second half started much like the first thought both teams moved with more intensity with Liverpool showing more threats to the United defence, as Mohammed Salah and Roberto Firmino made their presence felt.

A misplaced header by Trent Alexander-Arnold in the 71st minute put Liverpool under unnecessary pressure but Paul Pogba who has been so far brilliant for United failed to get more power to his header.

United came close again in the 75th minute through Fernandes who picked up a low cross from Shaw but Alisson’s brilliance kept the game goalless.

Thiago Alcantara made a bold move to steal the lead for the home side after beating Fred only to get his shot parried by David De Gea.

The former Bayern Munich playmaker came closer to another chance but he belted it wide away from United’s goal post.

Pogba came closer in the 83rd minute after a daunting run from Aaron Wanbissaka, but the Alisson stood his ground to deny the Frenchman.

United finished the game stronger with more attempts as Alisson’s heroics saved Liverpool’s blushes as they maintain their about four years unbeaten run.

Solskjaer’s men are now two points clear of Leicester City in second place and three ahead of Liverpool who remain in the third position.

Related Topics:FeaturedLiverpoolManchester United
Up Next