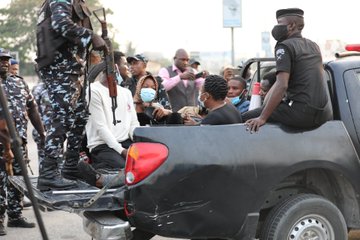 The Center for Human and Socioeconomic Rights has called for their immediate and unconditional release of #OccupyLekkiTollGate protesters arrested in Lagos on Saturday.

The group condemned the arrest of at least 30 protesters, including popular comedian, Debo Adebayo, aka Mr Macaroni, by the security operatives of the Lagos State Government.

The group’s statement read, “The Center for Human and Socioeconomic Rights condemn and call for the immediate and unconditional release of all the protesters under the aegis of #OccupyLekki arrested today in Lagos by the policemen deployed to the protest ground to maintain law and order.

“We heard that the arrested and brutalised protesters have been taken to the Adeniji Adele police station and the State Criminal Investigation Department, Panti.

“The protesters were protesting against the Lekki toll gate plaza reopening, which was the venue of October 20, 2020, shooting that led to the death and left some EndSARS protesters injured.

“This was the situation that prompted the Lagos State government to set up a judicial panel of enquiry to look into the complaint of aggrieved persons while the panel has yet to round up their investigations.

“The basis of the EndSARS protest then was the current state of the insecurity in the country, protesting the high level of corrupt practices, asking for free and qualitative education, demanding for accountability from those who were saddled with the responsibility to handle the country’s economy.

“It is the fact that there are still some petitions submitted to the panel by some who claimed to have lost relatives on October 20, 2020, shooting and their cases have not been heard; we believe this may be one of the reasons for their demand for the Lekki Toll Gate reopening to wait till the panel rounded up and submitted the report and outcome of their findings.

“Therefore, we urge the leadership of Lagos State Police Command to caution its men, to stop harassing innocent citizens who are demanding their rights legitimately without breaking the law.” (SR)