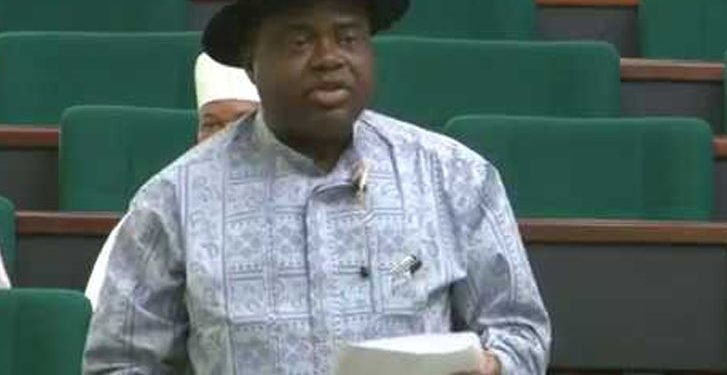 Governor Duoye Diri of Bayelsa State, on Tuesday, lodged 12 grounds of appeal before the Court of Appeal in Abuja to challenge the tribunal judgement that sacked him from office.

He also ordered the Independence National Electoral Commission, INEC, to conduct a fresh election in the state within 90 days.

In the Notice of Appeal he filed through his team of lawyers led by Chief Chris Uche, SAN, on Tuesday, governor Diri, urged the appellate court to set aside the majority judgement of the Bayelsa State Governorship Election Petitions Tribunal which nullified his election and uphold the Minority verdict.

The tribunal had in a majority judgement by two out of the three-man panel of Justices, voided the outcome of the gubernatorial election that held in the state on November 16, 2019, over the exclusion of one of the registered political parties, Advanced Nigeria Democratic Party, ANDP, in the contest.

Two members of the panel, Justices Sikiru Owodunni and Yunusa Musa said they found merit in ANDP’s contention that it was unlawfully excluded from participating in the governorship election by INEC, despite the fact that it fulfilled all the statutory requirements.

Justice Musa who read the lead judgement in the matter, upheld the petition, saying the tribunal was satisfied that INEC illegally excluded ANDP and its governorship candidate, King George, from the election.

He held that INEC lacked the powers to disqualify ANDP’s candidates after it failed to act on a letter the party wrote to be allowed to substitute its deputy governorship candidate.

However, in a dissenting judgement, Chairman of the tribunal, Justice Ibrahim Sirajo, affirmed governor Diri’s election after he dismissed the petition for being statute-barred.

Justice Sirajo said there was evidence that ANDP was disqualified from the election for fielding an ineligible candidate.

He noted that the party nominated an underaged deputy governorship candidate, who admitted that he was 34 years old, instead of the 35 years age bracket the Constitution stipulated.

Justice Sirajo said there was equally evident that the party failed to substitute the candidate till the statutory window for such substitution elapsed.

Meanwhile, in his appeal, a copy of which was sighted by Vanguard last night, governor Diri, prayed the appellate court to set aside the entire majority decision of the Tribunal (per Hon. Justice Yunusa Musa and Hon. Justice S. M. Owodunni) and to dismiss the 1st Respondent’s petition.

He further urged the Court of Appeal to, “uphold the minority judgement of the Chairman of the Bayelsa State Governorship Election Petition Tribunal, Hon. Justice Muhammad I. Sirajo, which clearly appreciated the law and correctly applied the same to the facts and rightly dismissed the petition.”

Listing some of the particulars of error in the judgement against him, Governor Diri, maintained that the petition by ANDP challenged its alleged unlawful exclusion from the election that was conducted on November 16, 2019.

He argued that the cause of action of the 1st Respondent, ANDP, crystallized on November 16, 2019, is the Election Day when it claimed to have realized that INEC indeed did not place it on the ballot.

“From the date, the 1st Respondent had 21 days within which to file a petition against the alleged unlawful exclusion from the election.

“There was no election on the 14th day of February 2020 held by INEC to ground the 1st Respondent’s petition filed on 26th February 2020, more than five months after the declaration of results, as the ground of complaint of unlawful exclusion is a complaint against an election, not a declaration.

“The case of the 1st Respondent is not hinged on the nullification of the votes of APC candidate, David Lyon, nor on the declaration of results by the 2nd Respondent on the 14th day of February 2020; nor on the return of the Appellant as the Governor of Bayelsa State, but on its alleged unlawful exclusion from the election held on the 16th day of November 2019.

“The 1st Respondent’s petition is statute-barred, in breach of the provisions of section 285(5) of the Constitution of the Federal Republic of Nigeria 1999 (as amended).

In his second ground of appeal, governor Diri argued that Justices Musa and Owodunni erred in law when they held that ANDP’s candidates were validly nominated.

On particulars of errors, he told the appellate court that ANDP forwarded names of underaged candidates to the Independent National Electoral Commission, INEC.

“The names of the candidates of the 1st Respondent forwarded to the 2nd Respondent were manifestly invalid for being below the constitutional age of 35 years.

“The 1st Respondent’s witnesses admitted under cross-examination that the said candidates were only 34 years of age.

“The nomination of a candidate in breach of the provision of the constitution, the Electoral Act and the INEC timetable and Schedule of Activities for 2019 General Elections (as in the instant case) cannot be termed a valid nomination.

“The mere proposal of a person as to its candidate by a political party in an election to INEC through a letter is insufficient and does not amount to a valid nomination.

“There was no document tendered by the 1xst Respondent stating whether the primary election was by direct or indirect election.

“The 1st Respondent failed to state the date of the primary election from which its said candidates purportedly emerged as to prove valid nomination of the candidates in compliance with section 87(1), (2), (3) and (4b) of the Electoral Act”.

He contended that the two Justices, in the majority judgement, erred in law when they held that INEC unlawfully excluded ANDP’s candidates.

“The 2nd Respondent as the umpire and regulator of the election ought not to have been expected to shut its eyes to the invalidity of the 1st Respondent’s candidates and the lateness of its submissions and attempt to substitute its candidates after the expiration of the deadline and for reasons other than death or withdrawal by the candidates.

“The 2nd Respondent as the umpire of the election had the duty to inform the 1st Respondent that the nomination of its candidate for the office of Deputy Governor was invalid for being under the constitutional age.

“The 1st Respondent (ANDP) accepted the advice but rather still deliberately forwarded another under-aged candidate.

“The power of the 2nd Respondent to vet, reject or disqualify any candidate of a political party has been restored by the provisions of section 285(14) ( c) of the Constitution of the Federal Republic of Nigeria, as amended.

“The act of the 2nd Respondent was not in any way unlawful or unconstitutional as to be declared a nullity by the Tribunal”.

Governor Diri argued that the majority judgement was legally defective as it held that ANDP had the locus standi to maintain its petition, adding that it was wrong the tribunal to hold that the complaint the party canvassed in its petition was not a pre-election matter.

“The learned Justices of the Tribunal (Hon. Justice Yunusa Musa and Hon. Justice S. M. Owodunni) erred in law when they held that the 1st Respondent proved its case as to be entitled to judgement.

“The said majority judgement is manifestly against the weight of evidence. Further grounds of appeal shall be filed upon receipt of the records of proceedings”, the appellant added.