Nollywood actor and humanitarian, Yomi Fabiyi, has kicked against Baba Ijesha continued presence in police detention over allegation of child molestation as abuse of power.

Fabiyi who stood solidly behind his friend and professional colleague, since his detention and media trial started made the statement via his social media page on Saturday.

While calling for the suspect to be released on bail, the actor described his continual detention as ‘injustice and abuse of power.’

Recall that Yomi had outrightly condemned the act of using the minor, who the actor allegedly raped seven years ago, as bait.

“RELEASE BABA IJESHA on BAIL now!
“It is against the law to hold any suspect down longer than allowed under our law without trial/bail bail for any bailable offence in Nigeria.
“To continue hold him is against his FUNDAMENTAL RIGHTS. It is INJUSTICE and Abuse of power. Do NOT indulge it.
“No More Police Illegal Detentions. Know Your Rights and Fight For It.”

He also wrote in the caption;

“GROUNDS FOR IMMINENT PEACEFUL PROTEST:
“Without the PROTECTION of Human Rights, Peace and Development is difficult to achieve.
“The Police or any law enforcement MUST NEVER HOLD any person beyond 48hrs(2 working days) for ALL BAILABLE OFFENCE. They either grant bail or charge to court. The court must listen to plea for bail and the judge decide.
“If the Police has any cogent reason(s) to hold a suspect beyond the statutory two days, the prosecuting officer under the law is MANDATED to approach a court of competent jurisdiction immediately to argue why AN EXTENSION is needed. Only court can give such order. No Police officer no matter how highly placed should unilaterally give such order. No matter the charges or accusations, NEVER SUPPORT HUMAN RIGHTS ABUSE, it will come back to you if you do.

“ILLEGAL IMPRISONMENT BY POLICE is a TOOL OF OPPRESSION and UNACCEPTABLE. If it is a bailable offence, honour it, don’t set the state on fire and turn around to claim hijacked, PEACEFUL PROTEST for any oppressed person or persons is Human Rights. Do the right thing, stand by what is right.”

In another post, he wrote that a peaceful protest was said to take place at Panti on Wednesday.

See his posts below; 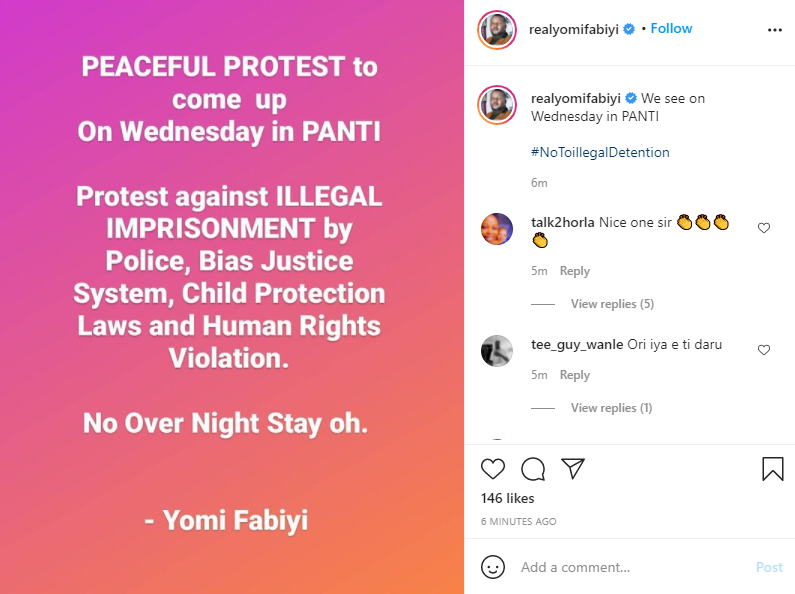