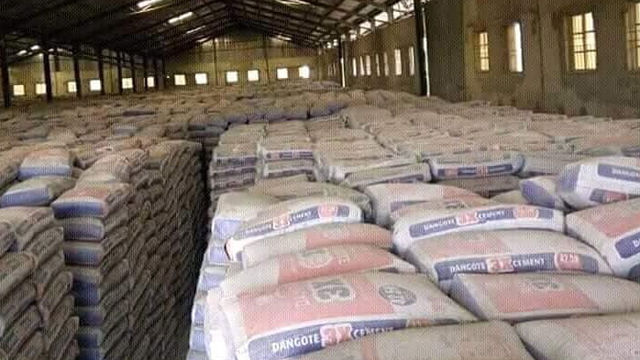 Prices of cement have increased by 67 per cent in the South-East states of Abia, Anambra, Ebonyi, Enugu and Imo.

A market survey at various wholesale and retail shops in the zone showed that the price of the product has increased almost by double when compared to the price in 2020.

A cement dealer at Kenyetta Market in Enugu State capital, Mr Ifeanyi Amadi, said the increase in the product’s price started last year due to the COVID-19 pandemic and increase in dollar exchange.

“The prices change on daily basis, so as we are talking now, I cannot guarantee the prices it will be sold tomorrow,” he said. Another retailer at Uwani, Samuel Uwakwe, said he was surprised at the rate prices of the product in the country.

Uwakwe lamented that few individuals were given the opportunity to supply the product and pleaded with suppliers to reduce the prices and make it available for the citizens. He maintained that the prices would likely crash during raining season.

A Block Industry Owner, Mr Albert Okechukwu noted that an increase in the price of the product affected his business as he still sold six-inch and nine-inch block at N170 and N180 respectively.

“This is the same price we sold last year and it is the same till date because we cannot change the price in order to retain our customers but most block industries have reduced the quality of their blocks,” he said.

A site Engineer, Mr Emma Ugwuoke said he wanted to start a building in the village when the price was N2,800 last year but was waiting to see if it would come down.

“There is nothing one can do than to buy it like that. I want the government to do something urgently about it because it is frustrating buying cement at that price,” Ugwuoke said.

In Abia, a cross-section of residents of Umuahia, the state capital, also decried the high price of cement, which ranges from N4,000 to N4,100 per 50kg bag. Those who spoke to NAN said the price hike had further dashed the hope of many Nigerians, wishing to own their personal homes. A businessman, Mr Victor Ugwu, said he had to suspend his building project because of the “unfortunate development”.

“I have stopped my project for now. I cannot afford to continue with the current price of the commodity. “The economy is very bad so I hope to wait until there is a drop in the price.

“I think the hike can be attributed to the monopoly being enjoyed by the cement producers in the country. Unfortunately, there may not be any respite until that monopoly is broken.”

However, a cement dealer, Mr James Ogbonna, said the problem had nothing to do with the manufacturers of the commodity. Rather, Ogbonna blamed the price hike on the activities of “shylock distributors” of cement.

He said that the hike had affected his business adversely, adding that cement patronage had been at the lowest ebb, since the price hike.

Another dealer, Mr Godwin Okafor, said that his sales had dropped drastically as a result of the hike.

“We have a lot of challenges in this cement business now. When we make a deposit and order for the goods, it takes about one month before get delivery,” he said.

It is a similar situation in Awka in Anambra as stakeholders decry the situation. Mr Kenechukwu Okoye, a cement dealer along Zik Avenue, Awka said before the #EndSARS protest in 2020, a 50kg bag of cement was sold at N2,500.

Okoye said though the distributors initially blamed the problem on difficulties encountered by the hauling firm transporting the product, the situation had come to stay.

In Owerri, Imo capital, the price of cement is between N3,850 and N4300, depending on the brand. At the Building Materials Market in Naze, Owerri North Local Government Area, Dangote and BUA cement are sold at N4,000 per bag while BUA and UNICEM are sold for N3,900.

Mr Okechukwu Okonya, a seller, said the cost could be attributed to the high cost of transportation as a result of fuel price.

Another trader, Mr Marcel Iwu, agreed that although there had been hoarding by major dealers, manufacturers had also complained of the increased cost of raw materials.

Iwu added that the prices could go higher or reduce at any given time, noting that even if prices fall, traders would want to sell off their old stock at higher rates.

NAN reports that in Abakaliki, Ebonyi, prices of almost all building materials have gone up. The prices of cement, rods of various sizes, corrugated roofing sheets and other building materials and accessories according to NAN findings have been on the increase since January.

Mr John Okoh, a cement dealer at Kpiri-Kpiri market in an interview with NAN attributed the development to lack of price control mechanism and high rate of the exchange rate of the Naira against the dollar.

“The development is indeed affecting sales and business because many builders have put a stop to their building and other construction projects because they cannot cope with the present high cost of the product.

Another resident, Mr Clement Igbo, who owns a block moulding industry, said that the high cost of cement was hampering production, saying that he no longer produced maximally due to a lack of buyers.

“A bag of Dangote cement which is one of the best products for our business is selling for N4500 and it is difficult to buy at this prevailing price and make enough production.

“We sell six-inch and nine-inch block before this price increase at N150 and N200 but now 6 inch-block is sold at N220 while the 9-inch sells for between N250 and N300 respectively.

“Many block industries in the town have closed down production while some have compromised standard which poses great dangers to the building industry,” Igbo said.

He expressed fears that the high cost of cement which had led to an improper ‘mixture’ of concretes for building purpose might affect the quality and standard of buildings.

Mr Jerry Onwe, an economic activist urged the Federal and state governments to revive moribund cement factories across the states to meet the increasing demands of cement consumption in Nigeria.

He noted that the quest for mass housing for poor Nigerians would remain elusive if urgent steps were not taken to address the high cost of building materials in Nigeria.

“In a nation where an average worker earns N30,000 monthly as take-home wage, how can such a person afford a house of his own in view of the prevailing price of building materials?

“We have reached a crossroad as far as the issue of building materials is concerned and this is a time for the government to intervene and bring the situation under control.

“The Nkalagu Cement Factory in Ebonyi is capable of supply the cement needs of the entire South-East if properly revived,” Onwe said.