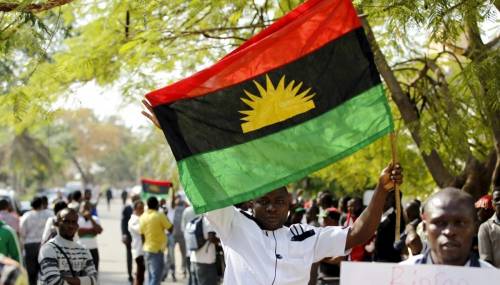 The Indigenous People of Biafra (IPOB) has revealed the reason the Kenyan government connived with the Nigerian government to arrest its leader, Nnamdi Kanu.

It is widely believed that the Nigerian government arrested Kanu in Kenya and repatriated him to Nigeria, but the Kenyan government had debunked its involvement in Kanu’s arrest.

However, in a statement issued by the IPOB spokesman, Emma Powerful, he disclosed that the Kenyan government sold out Kanu to the Nigerian government for financial and oil inducement.

Emma claimed it had evidence of the dirty deal reached with the Nigerian government before Kanu’s rearrest, Vanguard reports.

The IPOB spokesperson, in his statement, said, “From our intelligence, Kenya betrayed our Leader because of financial inducement and offer of oil by Nigeria.

“The negotiations were midwifed by the Nigerian Ambassador in Nairobi who bargained with President Uhuru kenyatta and the Kenyan Immigration Authorities. Uhuru Kenyetta was blinded by the oil money offer and he consented to this wickedness.

“The Kenya President, Uhuru Kenyatta, and Ambassador to Nigeria should be ashamed of themselves for betraying an innocent man because of money. But we assure them that they will pay heavily for this treachery!”

MORE READING!   791,790 Americans lost $4.1b to cyber criminals in 2020 – FBI
Related Topics:IPOBKenyaNigeriaNnamdi Kanuoil
Up Next