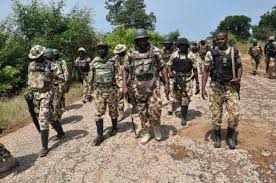 The Commander of the task force,Maj.-Gen. Chukwuemeka Okonkwo, disclosed this while presenting the suspect to newsmen on Friday in Jos.

According to Okonkwo, the suspect lured the victim at about 7 a.m. on Friday and later held her captive.

He said that the suspect called the husband of the victim and demanded a ransome of N2 million.

“This suspect , Adamu Umar, lured Zuwaira Mohammed this morning around Guratop community of Jos South and kidnapped her.

“The suspect claimed to have some items to sell to the victim and when she showed up, he held her captive and
demanded a ransome of N2 million.

“The husband reported the case to our men stationed in the area and we advised him to agree to the terms.

“Then, our troops immediately stormed the location, arrested the suspect and rescued the victim,”he said.

The commander said the suspect had sustained injuries from gunshot wounds, adding that he was shot while trying to escape.

Speaking to newsmen, the suspect denied the allegation, insisting that the victim came to him demanding for sex and money.

Umar, who spoke in hausa, said he had never been involved in kidnapping or armed robbery in his life.

It was reported that this arrest makes it the third time the task force had arrested the suspect over cases of armed robbery and kidnapping.