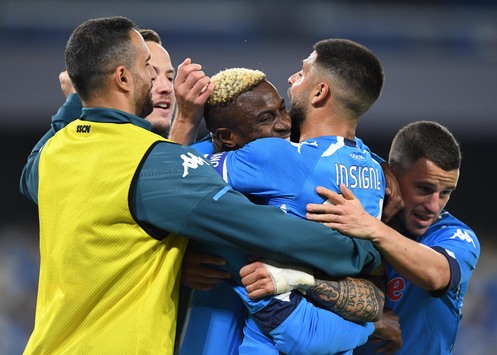 Super Eagles striker, Victor Osimhen was on target again as Napoli boosted their Champions League qualification with a 2-0 win over Torino.
Gennaro Gattuso’s men bagged two early goals against the 16th-placed Torino at the Olimpico di Torino and it was enough to get them the much-needed away win.

Chelsea outcast, Tiémoué Bakayoko netted in the 11th minute through an assist from G. Di Lorenzo before the Nigerian striker made it 2-0 two minutes later.

The win takes The Blues into the third position after leapfrogging fifth-placed AC Milan and defending Champions Juventus by goal difference (1).

They are, however, level on points with Andrea Pirlo’s men, who are struggling to defend their Scudetto.

Milan slipped from third to fifth place after suffering a 3-0 defeat to 6th-placed Lazio, thanks to goals from Joaquin Correa (2′, 51′) and Ciro Immobile (87′).

Osimhen is enjoying a good top-flight form again after a poor start to life in Naples when he suffered a shoulder injury and contracted COVID-19.

He has now scored three goals in four games for Gattuso’s side; against Sampdoria, Lazio and Torino.