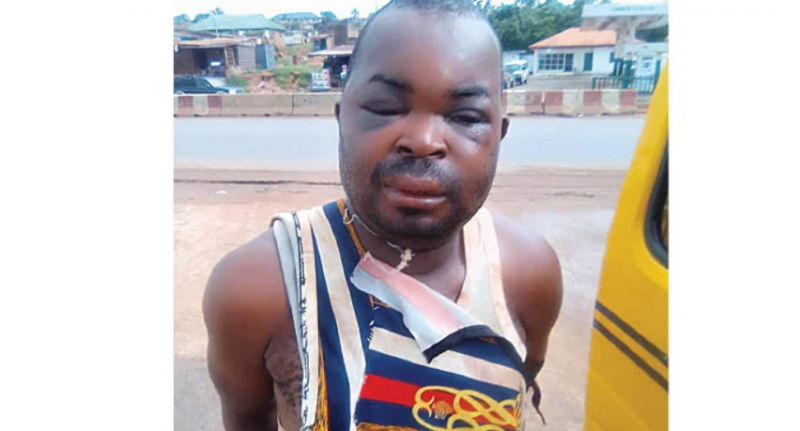 Police in Ogun State have arrested one commercial motorcyclist identified as Denis Nwambam, for the alleged murder of a tricycle rider, Wasiu Osinowo, in the Matogun area of the state.

Nwambam and Osinowo reportedly had struggled over the right of way, while they were both plying the road around 11 pm on Wednesday.

Some minutes later, Osinowo was said to have flagged down Nwambam along the road and challenged him to a duel during which the latter stabbed him in the stomach. He bled to death, according to the report.

It was gathered that the police at the Agbado Division were alerted to the incident and the Divisional Police Officer, CSP Kuranga Yero, led a team to the scene to arrest the suspect.

Meanwhile, on Thursday, some angry youths reportedly took Osinowo’s corpse to the police station and demanded that Nwambam be released to them.

A resident, Deji Gabriel, said that it took the intervention of some elders in the community to prevail on the protesters.

He said, “The deceased’s friends protested at the station. They brought his corpse and demanded that the suspect should be released to them. It was a community leader called Fatai Asiwaju and others who pacified them. They later left with the corpse.”

Narrating what transpired that night, Nwambam, a 36-year-old father of three, admitted to have stabbed Osinowo but said it was not intentional.

He said, “The man (Osinowo) and I were coming from the same direction. He was riding a tricycle while I was riding a motorcycle. He nearly hit me and I cautioned him to keep to his lane. We exchanged words and parted ways. I didn’t know he and his friends had gone to lay in ambush for me.

“As I approached the spot where they were, they descended on me and beat me up. I abandoned my bike and fled. They chased me to a bar and I picked up a knife to defend myself. I just held the knife. He wanted to get hold of me when the knife struck him in the stomach. That was what happened.”