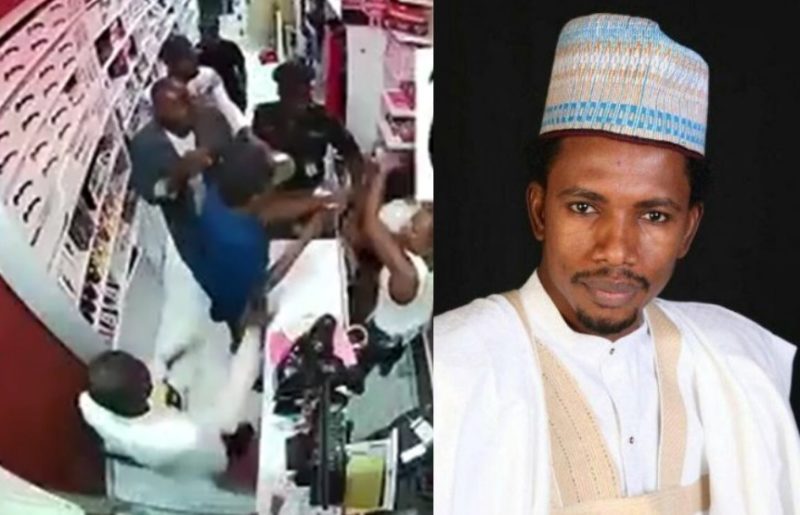 A video of Nigeria’s youngest Senator, Elisha Abbo, assaulting a yet to be identified lady in a sex toy shop in Abuja is making the rounds on the internet.

41-year-old Abbo, a first-timer at the Senate, represents Adamawa North Senatorial District at the National Assembly.

According to Premium Times, the incident happened in the presence of an armed mobile police officer on May 11 before the lawmaker was sworn-in as a Senator on June 11. In the footage shared on social media, the cop watched as the lawmaker assaulted the woman and also attempted to arrest Abbo’s victim.

Abbo was said to have entered the shop at about 6:00 p.m. on May 11, a Saturday with three young women to purchase adult toys, but shortly after they began shopping, one of the three girls started throwing up. She was said to have vomited multiple times, prompting the shop owner to remark that the woman should have vomited outside and not inside her shop, especially since she was not a child.

Eyewitnesses said the Senator was agitated by the sudden illness of one of his girls and accused the shopowner of poisoning the store’s air conditioner.

The shopowner’s argument that if the air conditioner had been contaminated others in the shop would have also taken ill was said to have further enraged Abbo, and the two began exchanging words over the matter before he continually slapped her.

MORE READING!  My boyfriend ordered me to wash bedsheet with my period stains on it, lady laments

The Senator thereafter descended on the woman (friend of the shop owner) who pleaded with him not to physically assault the shop owner.

The assaulted woman, who is nursing a child, was taken to a hospital, where she was treated for eye inflammation and other injuries she sustained during the attack.

Eyewitnesses revealed that Abbo returned to the shop the next day to see whether a CCTV footage of the incident existed and he was told that the CCTV in the shop was not functioning. He was said to have been very worried about the incident, threatening to deal with them if the footage of his violence ever surfaced.

The victim and her lawyer reported the matter at the Maitama Area Command since May 14, but the police have continued to stall, saying they did not know how to contact Abbo.

The victim and her lawyer were said to have demanded an apology from Abbo. They also want him to settle the medical bill and desist from further threats of physical harm against the woman.

They also wanted a criminal investigation and possible prosecution of Abbo for his action.