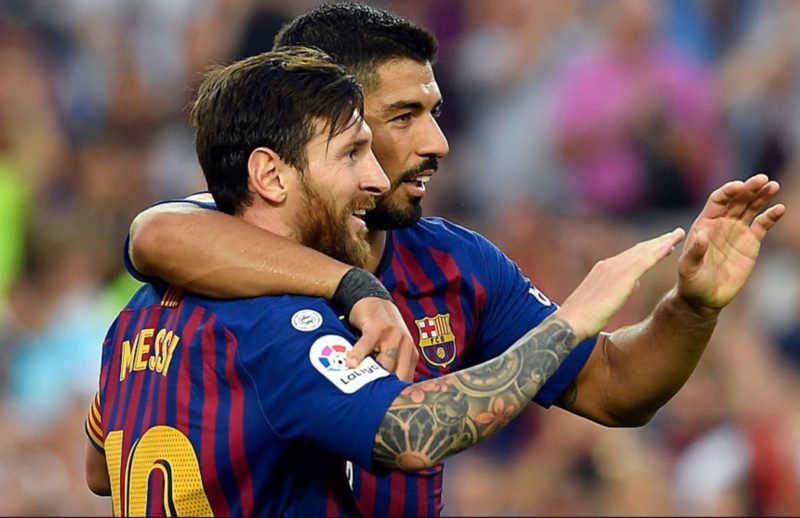 Barcelona star, Messi has hit out at the Spanish giants over the dismissal of Urugyaun striker, Luiz Suarez who joined Atletico Madrid after terminating his Camp Nou contract.

Suarez who Messi described as “one of the most important players in history” became unwanted at the club following the arrival of new manager, Ronald Koeman.
Messi’s comment may further dampen his relationship with those running the club, coming after making open his desire to quit the club some weeks ago.
The Barca board blocked his exit with a huge price tag and the 33-year-old eventually revealed to Goal that he will be honouring the final year of his contract, meaning he will likely leave on a free transfer at the end of the 2020/21 season.
After the formidable partnership between the South American due was severed with Suarez’s exit, Messi took to his Instagram page to share his disgust at the club’s decision.
He said, “I had already begun to imagine it but today I went into the dressing room and it truly dawned on me. It’s going to be so difficult to not continue to share every day with you both on the pitches and away from them.“We’re going to miss you so much. We spent many years together, many lunches and many dinners. So many things we will never forget, all the time we spent together.
MORE READING!  Former France goalkeeper, Bruno Martini is dead

“It will be strange to see you in another shirt and much more to come up against you on the pitch. You deserved a farewell that fit with who you are: one of the most important players in the history of the club. Someone who achieved great things for the team and on an individual level.

“You did not deserve for them to throw you out like they did. But the truth is that at this stage nothing surprises me anymore.”

Suarez hit 198 goals for Barcelona through just 283 appearances, with his impressive strike rate complementing that of Messi and both stars have bonded strongly on and off the pitch.