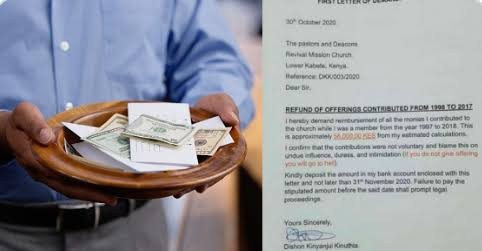 Dishon Kinyanjui Kinuthia, a Kenyan Christian, took to Twitter to share the letter he wrote to his church while warning that there will be consequences if he doesn’t get a refund.

Dishon, who used to attend Revival Mission Church, Kabete in Nairobi, said he was a member from 1997 to 2018 when he left the church.

In his letter, he asked the church to refund him the total sum of 58,000 KES which, according to him, is his estimate of his contribution to the church over two decades.

He said the contributions he made to the church were not “voluntary” but was done under “undue influence, duress, and intimidation.”

He asked the church to deposit the money in his account on or before November 31, 2020, or he will start legal proceedings.

Read the full letter below;