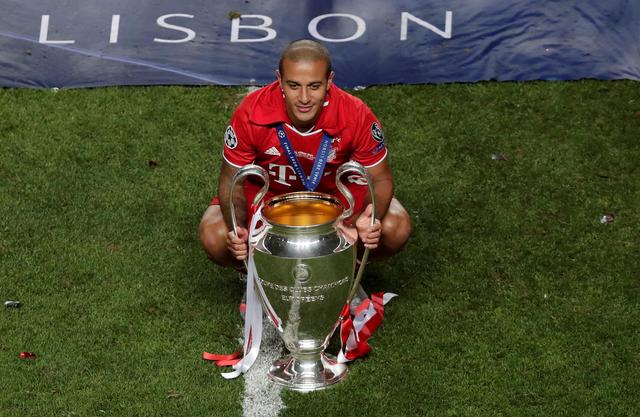 British media reported Thiago has signed a four-year deal with Liverpool after the Merseyside club agreed on a transfer fee worth 20 million pounds ($25.91 million) plus five million pounds in add-ons with European champions Bayern.

The 29-year-old has agreed on a long-term deal with Liverpool and joins the Premier League champions for an undisclosed fee. He won the Bundesliga title in each of his seven seasons with Bayern and played in last month’s Champions League final victory over Paris St Germain.

“I think it’s an amazing feeling. I was waiting for this moment for a long time and I am very, very happy to be here,” Thiago told the club’s website.

“When the years are passing, you are trying to win as much as you can – and when you win, you want to win more. I think this club describes what I am as well… I want to achieve all of the goals, win as many trophies as possible.”

Liverpool began their league title defense with a 4-3 victory over Leeds United on the opening weekend, and manager Juergen Klopp expects Thiago to adapt quickly to the English game.

“He just was ready for a new challenge and he decided for us,” Klopp said.

“We played against him when we played Munich in the Champions League two years ago, so he knows what kind of machine we can be and he wanted to be part of that.”

Related Topics:LiverpoolPremier league
Up Next