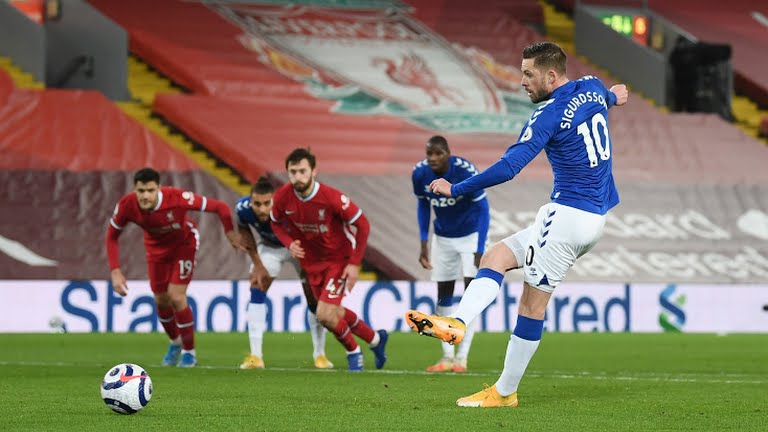 Everton bagged a win over Liverpool at Anfield for the first time in 22 years as the defending champions slumped to a 2-0 defeat against their Merseyside rivals.

Liverpool losing streak has now extended to four consecutive defeats in the Premier League after losing to Brighton, Manchester City and Leicester City.

The home side looked to bounce back from the defeat to the Foxes after securing a 2-0 victory over RB Leipzig in the first leg to their Champions League Round of 16 tie but found themselves with a mountain to climb after falling behind three minutes into the derby.

James Rodriguez slotted a through ball beyond Ozan Kabak to find striker, Richarlison who wasted no time to beat Alisson Becker with a low to the bottom corner as the visitors took the lead.

The Brazilian keeper pulled a number of saves to keep the game at 1-0 while the Reds kept asking questions of Jordan Pickford on the other end but the Englishman was tidy enough to stop the Liverpool threat, denying Jordan Henderson, Trent Alexander-Arnold snd Mohammed Salah.

A counterplay late in the second half gave Dominic Calvert-Lewin an advantage to increase the tally. His goal-bound run to the free ball after a rebound was unintentionally blocked by Alexander-Arnold, giving away a penalty.

Gilfy Sigurdsson stepped up to take the shot seven minutes to regular time and beat Alisson who went the right way but couldn’t stop the Toffees from winning the game 2-0. Jurgen Klopp’s men first derby defeat in 11 years since losing 2-0 at Goodison Park in 2010.

Carlo Ancelotti’s side won their first Merseyside derby at Anfield since 1999 with a 2-1 victory over Liverpool to end a 22-year wait.

Everton and Liverpool are now tied on 40 points each on the log but the Reds edge the Blues who occupy the seventh position on the log, one spot behind the defending champions with goal difference advantage.

Related Topics:evertonLiverpoolPremier league
Up Next