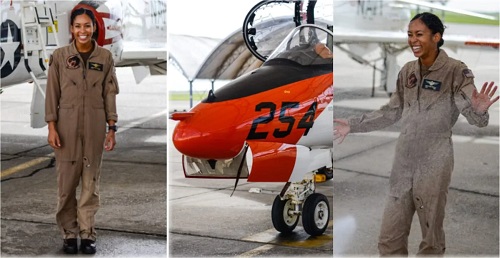 A black woman has made her family proud after yet another milestone.

Pilot LTJG Swegle has celebrated her recent accomplishment at her graduation ceremony as the first-ever black woman tactical pilot in US Navy history.

For the first time in the US Navy history books, LTJG Swegle became the establishment’s first black woman to attain this feat.

Although details of the name of the specific jet or when she was first admitted to the US Navy is not immediately public, she is being lauded on social media.

According to tiremeetsroad.com, a small percentage of applicants are accepted into Naval Flight School and an even smaller percentage make it through.

As a woman who has conjured and shattered the glass ceiling, she has become an inspiration to other women, especially young girls who aspire to fly.

In a post by a Twitter user identified as Miss Alissa, LTJG Swegle completed her advanced flight training at Naval Air Station Kingsville with her last scheduled flight culminating in the time-honoured tradition of a spray of water.

Alissa shared impressive images of LTJG Swegle from her graduation.

The frames have gathered thousands of positive reactions as of the time of this publication.

”That’s great! That smile could light up the sky! I worked with the daughter of the first Black female air traffic controller in the FAA!”

Related Topics:Naval Air Station KingsvilleTactical Jet Pilot In US NavyUS NAVY
Up Next

I had no idea I was pregnant until the day of delivery, woman narrates