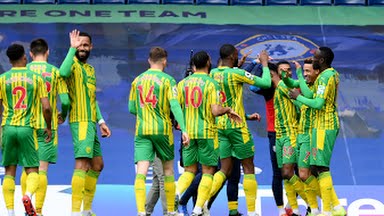 Chelsea took the lead through Christian Pulisic but were dealt a blow when Thiago Silva was sent off for a second booking.

Sam Allardyce’s men capitalised on the one-man advantage by slotting two past the Blues’ goalkeeper before the end of the first half.

Matheu Periera bagged a first-half brace to give the visitors the lead for the first time in the game.

Callum Robinson made it 3-1 in the 63rd minute before Mbaye Diagne netted a fourth five minute later.

Mason Mount pulled one back for the Blues after an assist from Timo Werner but Robinson completed his brace before the whistle to make it 5-2.

The Baggies who are battling relegation have now won Chelsea for the first time since 1978.

Related Topics:ChelseaWest Brom
Up Next

JUST IN: Man Utd fight back to beat Brighton 2-1

Iheanacho extends stay at Leicester till 2024