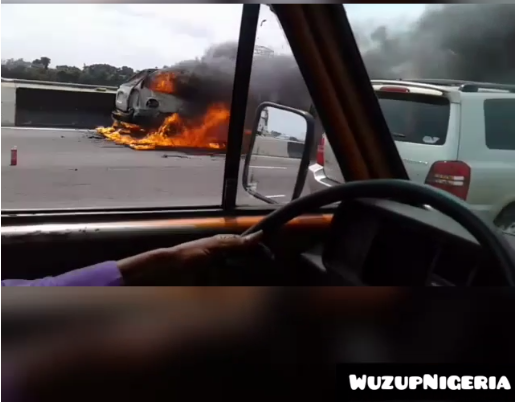 Commuters watched helplessly on Friday afternoon as a grey sports utility vehicle went up in flame on Third Mainland Bridge in Lagos.

The fire incident took place at the Adekunle-Iyana Oworo axis of the bridge at about 2.15pm.

An eyewitness told WuzupNigeria that the vehicle had just passed the Adekunle intersection when the driver noticed a thick smoke coming from the car bonnet.

“By the time he stopped the car, the smoke has resulted into a huge fire.”

He said that all efforts made by some motorists and an officer of the Lagos State Traffic Management Authority (LASTMA) to quell the fire proved abortive.

The incident has led to a heavy traffic congestion on the bridge as many hapless motorists were seen walking through the traffic to find out the cause of the gridlock.

As at the time of filing this report, a towing van and officials of the Lagos State Emergency Management Agency (LASEMA) were seen making their way to the scene.

Watch the video below…

Related Topics:Gridlock as SUV catches fire on Third Mainland Bridge (VIDEO)
Up Next